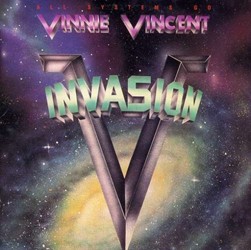 Former KISS guitarist Vinnie Vincent has plans to re-record the ‘All Systems Go’ album. Originally released in 1988 with Mark Slaughter on vocals, Vincent wants to release the album the way it should have been recorded — with the Vincent production, inclusive of all guitars, bass and vocals which would bring back the ferocious over the top sound of the first Vinnie Vincent Invasion, with Robert Fleishman on vocals.

After quitting Kiss following the ‘Lick It Up’, Vinnie Vincent recorded and produced a demo containing the songs “Boyz Are Gonna Rock” “Shoot U Full of Love” and No Substitute.” Vincent played guitars and bass on all the tracks and Myron Grumbacker played drums. Vincent heard a demo of Robert Fleishman and knew he found the perfect vocalist for his music. Robert was asked to sing on the three song demo Vinnie had recorded. Fleischman and Vincent’s chemistry was unmatched. Chrysalis Records New York heard the demo and called Vincent in L.A. With Vincent’s demo blaring in the background, Chrysalis asked Vincent to fly to New York immediately stating they were anxious to sign Vincent as a solo artist.

After months of negotiating, an eight album $4 million deal was born. The common misconception was that a ‘band’ was signed to the label, however, it was Vincent who was signed exclusively to Chrysalis as a ‘solo artist’ off the power of his demo. Vincent began recording and the end result was ‘Vinnie Vincent Invasion’. A virtual powerhouse of great songs, in your face over the top guitar, great layered intricate harmonies and piercing vocals, ‘Vinnie Vincent Invasion’ exploded onto rock radio and became the fastest selling debut album in the history of Chrysalis Records. The name Vinnie Vincent Invasion was actually the name of the solo album which Vincent evolved into a band name. However, despite Vincent’s enormous efforts to fit Robert into his contract, Chrysalis, failing to know a good thing when they saw it, destroyed the chemistry, letting Fleischman go unrewarded forcing him to resign.

Vincent, disheartened, was forced under duress to tour in support of his explosive ‘Vinnie Vincent Invasion’ with a replacement singer who Vincent felt was woefully substandard to the quality which Vincent had not only strived for in his music, evidenced by the first Vinnie Vincent Invasion album. Watching the quality of his music sinking, Vincent began losing interest in the teeny bopper image that began replacing his original heavy metal vision. Vincent nonetheless moved ahead in order to try and make it work, despite his loss of heart.

Vincent began writing songs for the “All Systems Go” album the follow up to ‘Vinnie Vincent Invasion’. Once the recording sessions were underway, it became painfully evident the production, sound and lead vocals were simply poor, lackluster and pale in comparison to Vinnie’s first Vinnie Vincent Invasion. Vincent knew he should have aborted the entire project, which included the ‘All Systems Go’ recording sessions, fired all the salaried employees, and regrouped with Fleischman, following the same recording paths of his original demos, with Vinnie on guitars and bass, but it was too late. ‘All Systems Go’ was released to Vinnie’s dismay.

With a dramatic change in Chrysalis management, Vincent was saddled with a situation he had no belief in. Vincent made the conscious decision in 1988 to disband the “group” after his disenchantment with ‘All Systems Go’ and with Chrysalis’s new management decision to pander to the “music fad.” In late 1988 Vincent, refused to extend Chrysalis the contractual option for a third Vinnie Vincent Invasion record when Chrysalis accidentally breached their option deadline to renew Vincent’s contract in late September 1989. Chrysalis’s contract with Vincent had a leaving member clause and option on the salaried employees Vincent used as band mates. Left without Vinnie Vincent under contract, and attempting to capitalize on Vinnie Vincent and Vinnie Vincent Invasion, Chrysalis picked up the option on two remaining employees. The rumors that Vincent was kicked out of his own band was baseless internet gossip, rumor and hearsay, having absolutely no basis in fact.