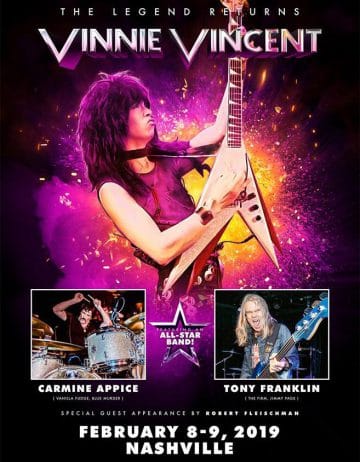 Former KISS guitarist Vinnie Vincent‘s first full concert is getting delayed for a few months as the guitarist’s December 7  and 8, 2018 concert dates in Tennessee, USA have been changed to February 8 and 9, 2019.

“The Vinnie Vincent dates in Memphis on December 7th & 8th have been postponed until February 8th and 9th in Nashville due to additional scheduling and logistical requirements by the promoter. Promoter Derek Christopher announced, “Vinnie is ready to rock and roll and is disappointed by the postponement, but we needed extra time to add and confirm additional guests for the show. We wanted to make sure it’s done right.”​

With the announcement of the new dates, it was also announced, “We are pleased to announce Vinnie will have an All-Star band in February that’ll include Carmine Appice (Vanilla Fudge, Rod Stewart, Jeff Beck, Blue Murder) on drums, and Tony Franklin (David Gilmour, Jimmy Page, The Firm) on bass.  Additional Special Guests will be announced too.”