After a series of cancelled events in early 2019, former KISS guitarist Vinnie Vincent seems to be on the right track since he has now held two smaller but apparently successful events in Nashville, Tennessee, USA. The first was an event dubbed the 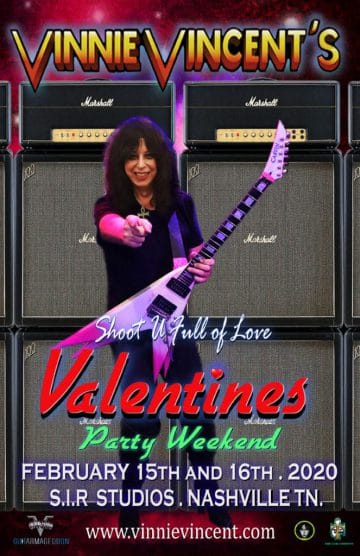 Birthday Bash on August 10, 2019 and the second one titled Vinnie Vincent’s Metal Merry Christmas took place on December 14 and 15, 2019. Both events were held at S.I.R. Studios in Nashville.

The 67 year old guitarist will now be holding an event titled Valentines Party Weekend at S.I.R. Studios in Nashville on February 15 and 16, 2020. The price to attend the event is $500.00 US per ticket.

Details for the event on Vincent‘s website consist of “MUSIC, PERFORMANCE, FOOD, WINE, SIGNINGS, and Q&A.”

With respect to his recent events, Vincent stated in part in a statement posted on Rock and Roll Experience with Mike Brunn‘s Facebook page on December 25, 2019 (with slight edits):

“There’s no rules anymore. Fans and artists can connect. The game is now what you make it and into want you want it to be. By sheer accident, I’ve reinvented a way for me to bring us together in the most unusual and unconventional way. There’s no set plan to any of this, things are loose and just seem to come together out of nowhere. The best part is performing for you. The fire of the shredd is where it starts and ends and in between the party happens.

Where it goes, I won’t know until we’re actually there. But I’m having the best time ever. And from all the comments I’ve read, you’re having as much fun as I am. I get to be like I was when I was a teenager playing in the basement inviting my friends over to sit around and enjoy the vibe, music and party. It’s amazing how I’ve recaptured that time. This Christmas party felt like the 80’s again, which was even more surreal. The one constant is that there’s so much on the list for the parties that we never seem to have enough days to do it all. The saying goes ‘time flies when you’re having fun’ and that we definitely are.”