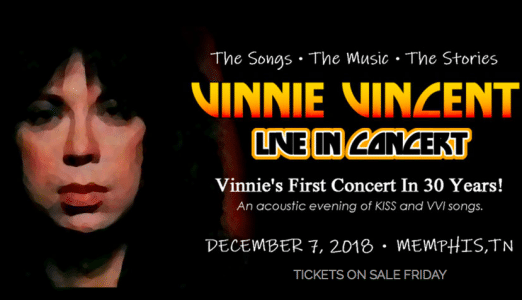 While Vincent was quick to announce the return of the Vinnie Vincent Invasion with lead vocalist Robert Fleischman towards the end of their appearance at the Atlanta KISS Expo on January 20, 2018, the singer took a more cautious approach reporting a few days later that he will have an “Invasion talk soon.”

The announcement that Vincent will be doing an acoustic gig on December 7, 2018 may lie with the fact that Fleischman previously stated at the end of January 2018 that he wouldn’t mind doing an unplugged set with Vincent but was not interested in a full on plugged in electric set. Fleischman opined at that time: “I can’t run as fast as I could then, I don’t fit in the same pants. To expect me to just go up there and wail, I just don’t see myself doing that. I could do some songs but (others) I probably couldn’t do because I’m an old guy now.”

Tickets for Vincent‘s acoustic gig will apparently go on sale on Friday, which is presumably tomorrow (on July 27, 2018).