Great news for Vinnie Vincent fans as the guitarist will be re-releasing his albums Euphoria (1996), which features Robert Fleischman on lead vocals, and Speedball Jamm (2004), which is one long instrumental lasting about 71 minutes, in June 2018. 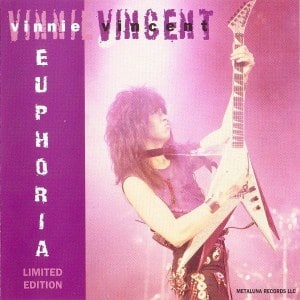 In addition, Vincent‘s never released Guitarmageddon (1997) will finally be getting released on CD this summer. Guitarmaggedon was to contain the four songs from Euphoria as well as apparently five other tracks. It featured Fleischman on lead vocals and Andre Labelle on drums.

The KISS Related Recordings website has a quote from Labelle stating (with slight edits): “I can’t say for sure but I remember recording with Vinnie on and off between 1989-1992 in Los Angeles at Grandmaster Recording Studios, Clear Lake Audio, and Corner Stone Studios. The album title was to be “Revenge“. At the time, Vinnie was also writing for Kiss. Gene Simmons liked the title and convinced Vinnie to let Kiss use it. Vinnie then decided to use the title “Guitars from hell” for his own, Later changing it again to “Guitarmageddon“. Robert Fleischman sang on all the songs that I played drums on. The songs I remember recording are: “Wild Child, Rocks On Fire, Euphoria, Get The Led Out, Nuke it, Shocker, Invincible, Full Shred, Young Blood, Ride the Serpent, Cock Teaser, Brainsaw”. Vinnie was changing song titles and arrangements quite often, So its hard to say anything for sure”.” 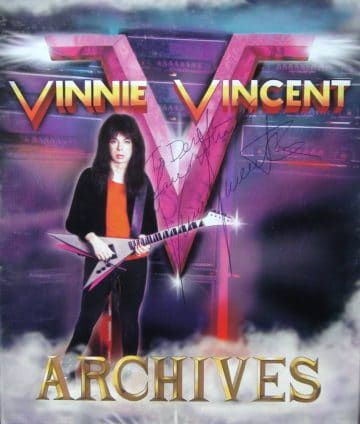 The following message was posted on Vincent‘s Facebook page on April 23, 2018:

SPEEDBALLJAMM and EUPHORIA will see a re-release in the month of June with new packaging designed to be collectors versions.

ALSO…….MASTER MIXES and RECORDINGS from… “GUITARMAGEDDON: will make it to CD by summer, and also the long awaited VINNIE VINCENT ARCHIVES.

I will be in the studio for about a month putting some finishing touches on a few tracks and then final assembly from there.

I WILL …..yes…I WILL BE UPDATING EVERYONE ON THIS….

LOOKING FORWARD TO SEE YOU GUYS AT CHILLER THIS WEEKEND IN PARSIPPANY NJ.