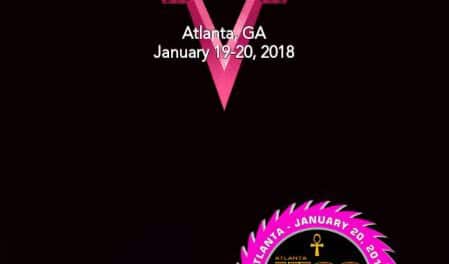 Vinnie Vincent to resurface as scheduled to appear at KISS Expo on January 19-20, 2018

One of the biggest enigmas in the world of hard rock / heavy metal — the ultra talented guitarist and songwriter Vinnie Vincent — will be resurfacing and is scheduled to make a public appearance at the KISS Expo scheduled in Atlanta, Georgia, USA on January 19-20, 2018. 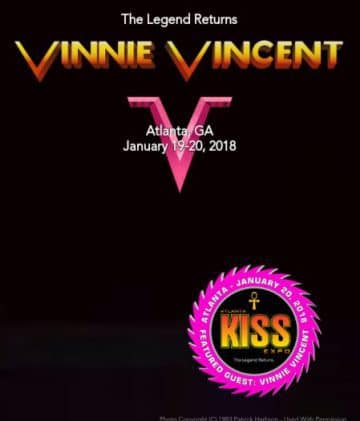 The LA KISS Expo website indicates that the Atlanta KISS Expo offers three different ticket packages with silver tickets going for $45, pink ones going for $75 and gold VIP selling for $289.

Vincent has been keeping a very low profile during the last few years. One very comprehensive article on the reclusive guitarist was posted on the American Gloam blogspot website on May 26, 2012 and states in part:

“On May 21, 2011, Diane Cusano drove herself to the sheriff’s office covered in blood and smelling of alcohol. Cusano told the police she and her husband had argued over a woman he had spoken with on the preceding Saturday. Cusano explained that during the argument, her husband, rock guitarist-songwriter Vinnie Vincent, had told her to get the fuck out of the house, smacked her in face, grabbed her by the hair, drug her through the leftover glass fragments of a broken plate on the floor, and threw her to the ground four more times. The police visited the Vincent/Cusano residence. Vincent refused to answer any questions about the incident and was arrested. On the property, police also found four plastic containers containing dead dogs. A tiny neighborhood in Rutherford County, Tennessee, suddenly received rare media attention as Cusano‘s story quickly became public….”

The American Gloam article concludes by stating: “…I’ve had a trouble finding any new developments with the court case in Nashville involving Vinnie or his wife Diane in the year since it happened. In June 2011, it was reported that it had been temporarily “retired” for a year as long as Vincent underwent anger management therapy. As far as my reading of this goes, he pleaded neither guilty nor innocent, and has not been charged or convicted. That year has barely passed, and I can’t find any articles about the outcome. That same month, Vinnie spoke, releasing a statement claiming the incident had been exaggerated and that the media had lied. The best report I’ve seen was delivered back then by the Nashville Scene, which also features Vinnie‘s statement.

Other appearances seem to be Vinnie‘s Youtube page, a website for Guitarmageddon Guitars featuring the Vinnie Vincent guitar (although I believe that deal never actually happened), and a link to his official online forum , which reads that there is a $500 annual membership fee.

All of this amounts to a strange career and life for a musician that still has basically rabid fans that have followed everything I’ve mentioned here, including the court cases, fiercely. There seems to be one unifying factor amongst most of those fans, and that is they wish Vincent would move beyond whatever behavior or situations he seems to constantly find himself in, and just make more music. I was inspired to write this piece based on a buddy letting me borrow a DVD called “KISS – Invasion (A Look at the Lost Egyptian God, Vinnie Vincent)“. The disc features footage of KISS being interviewed for the program “Night Flight” circa 1982 while promoting “Creatures of the Night.”. Over the years I’ve heard nothing but criticism of Vincent based on obsessively reading whatever falls out of Simmons or Stanley‘s mouth. After seeing the footage of Vinnie being interviewed on this program and at various conventions from over the years, he came off as such a genuine, nice, sincere, modest dude. All of the stories behind the scenes disagree with this. Either way, whether he has self-destructive issues, or is unethical, or insane, or whatever, he wrote a lot of songs I’ve enjoyed listening to since 1986, and that’s all I really pay attention to when I walk over to my record player.”

Vincent‘s statement as outlined by the Nashville Scene and transcribed by Metalunderground.com states:

“I want to thank the many people who sent their well wishes to me through this very hurting time. There is much to say to all of you but the most important thing for me to let you know is that what you have been reading is not true. Irresponsible reporting and fabrication of events that never happened destroys peoples’ lives, and that is exactly what has happened. It’s very unfortunate we live in times where you’re guilty even if you’re innocent, but it’s the way of the world now. It’s also sad to me that not only do the media get away with publishing unsubstantiated sensationalized reports that are then taken as ‘the truth,’ but people now routinely hide behind their computers and usernames to intentionally inflict enormous damage without consequence, all for their own amusement. What they don’t know is the pain they cause will always be greater than their fabrication or exaggeration.

About my precious dogs: My dogs and cat have been, are and will always be the most important thing in my whole life. I love them more than my words can say. I look at dogs and cats as “perfect little people” with loving and unconditional hearts that I believe God gifted to us to help comfort us through our lives, which always seems to be filled with pain in one way or another. I have 20 dogs that were rescued since 1999 from unspeakable and horrible abuse. I never turned my back or said no if a dog or cat needed a loving home. Each one of them is spoiled rotten; great food, love, comfort, care and shelter. They never leave my side and sit with me when I watch videos or when I play my guitar, the sound of which seems to fascinate them. Out of my twenty dogs, half of them are big dogs and the others are small. Fencing was put up to separate the big dogs from the little ones who could roam without any problem. One day, without my knowing, some of the big dogs accidentally got loose somehow and killed three of my babies.

When I found out it was too late. I was shattered and just too devastated for words. I still am and always will be. I will never get over it and I will always live with a pain greater than that of anything I had ever known or ever will know. I wrapped them each in blankets and laid them to rest in ‘caskets’ where I made a cross and wrote the words to ‘Danny Boy’ on their casket. The weather had been pretty bad here for awhile and an excavator was planned to come the property to dig up the ground so I could give them a proper burial when this terrible thing happened. I only hope someday we’ll be together and I can watch them once again run in the meadows under the deep blue skies. As for the despicable reports regarding my beloved dogs, those who know me know I would never harm any animal as they are God‘s most beautiful and innocent of creations. I’m a vegetarian because of my respect for all animals. For those of you who wrongfully accused and judged me based on these ‘stories’ I understand because I would feel the same way if it was the truth. But it’s not the truth. So, to all who perpetuated these cruel and vicious lies may the truth bring you to your senses so you can stop these terrible and unfounded accusations.

About the domestic situation: As you must know, this is a private matter that I cannot comment on at this time. Please don’t believe everything you read. I would never hurt anyone-ever. What has been reported is an absolutely inaccurate depiction of the events that occurred that evening. When it’s time the truth will be known.

In all, God gave me a silver lining to this terrible time by putting a long lost family back together through this tragedy and for that, it was worth what I am going thru. Unfortunately this “incident” caused my loved ones, who suffered through another emotionally devastating experience, to suffer a new burden they didn’t need to bear. As much as they are hurting for me and from this, they’re still there for me. I am a lucky person.

I’m an immensely private person and these events have caused me great pain and emotional anguish. I am requesting that you respect my privacy and that of my family during this difficult time and not engage in harmful useless gossip posted on blogs and forums.

My Music: It has been my greatest desire to put out my new music including remixed/remastered tracks that I am very proud of which many of you seem to enjoy, but I have experienced setbacks that hindered and delayed my plans. I am hoping to work through it all and get back on track. I would appreciate it if you could please bear with me.

About the VINNIE VINCENT MODEL GUITAR: My website is in the process of being constructed. Keep watching Youtube for the link to the site and for the video catalog. The Vinnie website will be a fun place to visit with everything Vinnie Vincent: music, photos, and the VINNIE VINCENT GUITAR in all its glory.”