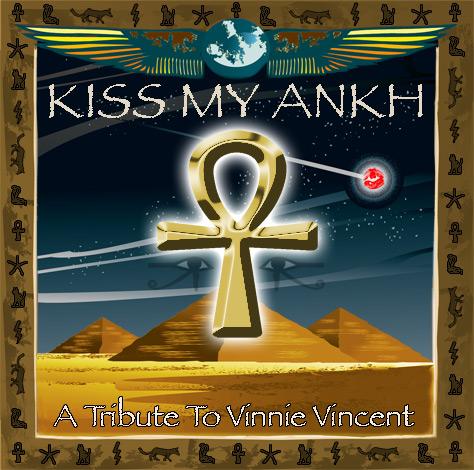 In honor of Vinnie Vincent’s birthday on August 6th, SplitScreen Entertainment has opened up pre-orders for its upcoming tribute album “KISS MY ANKH: A Tribute To Vinnie Vincent.” It has also revealed the album’s full track listing and complete artist roster. Scheduled for release on August 27th, the album is now available for pre-order via the SplitScreen Entertainment website. Additionally, song samples of all tracks are now available at the official “KISS MY ANKH” MySpace page. All songs on the tribute were written or co-written by Vinnie Vincent and originally appeared on albums by Kiss and the Vinnie Vincent Invasion.

“KISS MY ANKH” features a mixture of veteran and rising talent, united by a common passion for the source material. The tribute kicks off in grand fashion with a retro take on “Killer” by YouTube sensation DoubleVirgo, who made headlines earlier this year at KissOnline with his vintage-flavored interpretation of another overlooked Kiss nugget. Next up is a soaring rendition of “I Still Love You” by New York metal masters Gods of Fire, who add their distinct bombastic flair to the familiar ballad. This is followed by Kiss concert staple “Lick It Up,” rendered with flash and finesse by the female-fronted Future 86, known for their long-running series of TV spots for media giant Cablevision. A soulful acoustic version of “A Million To One” follows by the one-man band of Steve Brown, founding Trixter guitarist and current frontman of modern rock outfit Stereo Fallout.

The album kicks into high gear with the explosive Vinnie Vincent Invasion anthem “Boyz Are Gonna Rock” by Mike Weeks (guitarist on the most recent solo offering from original Invasion vocalist Robert Fleischman), alongside former Nitro bassist T.J. Racer and drummer Andre LaBelle, who himself played drums on Vinnie Vincent’s fabled yet unreleased third album, “Guitars From Hell.” “Carnival of Souls” comic book creator Jazan Wild tears it up with a raw and raspy version of “Back on the Streets,” a song recorded not only by Vinnie Vincent but also demoed by Frehley’s Comet and even Kiss itself. The Invasion is further represented with a new rendition of “That Time of Year,” a collaboration between former Adler’s Appetite vocalist Sheldon Tarsha, former Alice Cooper guitarist Ryan Roxie, former Altaria bassist Marko Pukkila and current White Lion drummer Troy Patrick Farrell. Also featured is “Love Kills,” the theme song from “A Nightmare on Elm Street 4,” hauntingly resurrected by Queen of the Reich vocalist Kelli McCloud and Vic Rivera of AdrianGale, Crunch and Poley/Rivera fame.

The disc races toward the finish line with a bold and brutal death metal take on the evil Kiss classic “Unholy” by Curse God and Die, a project featuring Paul LaPlaca of the Chris Caffery solo band and Bumblefoot drummer Dennis Leeflang. The tribute comes to a dramatic close with a unique industrial/electronic interpretation of “I Just Wanna” by The Dead Zoo Keepers, featuring Kurt Monson and Dan McCafferty of the Rocklahoma-reunited Wild August with vocals by Danny Stanton, president of Coallier Entertainment and representative for such acts as Twisted Sister and Lita Ford.

Though Vinnie Vincent himself has not released any new material in over a decade, “KISS MY ANKH” will pay tribute to the undeniable musical legacy of the former Kiss guitarist. Vinnie’s compositions are widely regarded as a highlight of the Kiss catalog and remain a staple of the live Kiss set list. Included on the tribute will be selections from the three Kiss albums to which Vinnie contributed, as well as the two albums he released with the Vinnie Vincent Invasion. Further details and pre-order information can be found at the SplitScreen Entertainment website.