Former KISS lead guitarist Vinnie Vincent appears closer to releasing some actual music. It’s not new music but the re-release of his album Speedballjamm, which will reportedly be available in February 2020 but limited to 1,000 copies. 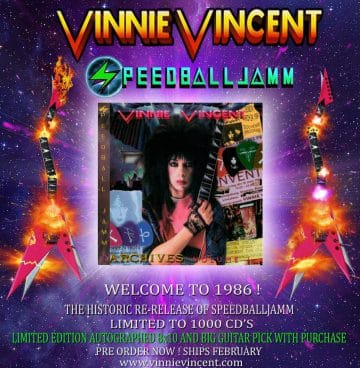 Back in April 2018, Vincent had announced that his albums Euphoria (1996) and Speedballjamm (2004) would be re-released but that did not seem to materialize.

“The historic official re-release of the iconic Speedballjamm is here!

This very special limited edition, autographed, hand numbered with COA will be limited to 1000 pieces worldwide.

Don’t miss this opportunity to own your piece of that magic year of 1986 with this very private peek inside a Vinnie Vincent shreds jam compilation of performances. No edits. The way it went down on tape. The hot snd nasty shreds from beginning to the end.

The invincible Vinnie Vincent in your face with Speedballjamm. This is one bad wild child so order your copies now.”