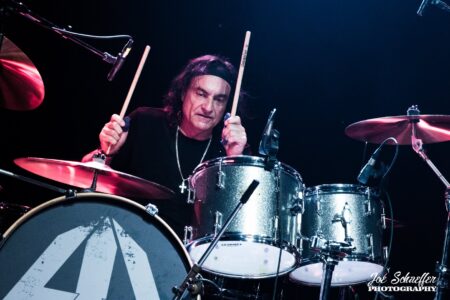 With respect to guitarist Vivian Campbell getting fired from Dio, Appice opined (see video at 24:40): “Vivian is a monster guitar player. There were some business problems within the band we were promised to be sharing and things we gave it up for the first album and tour cause it costs a lot of money to launch a band and Ronnie was putting in his money. Then it never happened we were doing tours and arenas back then one of the tours grossed 8 million dollars but we got nothing out of it, just salaries. What was promised never happened and Vivian really called management out on it. So that really became bad blood with Ronnie but we all felt the same way. Ronnie and Vivian did not see eye to eye and then Ronnie said to me I am going to fire Vivian, I’m like WHAT? I was just in shock. I kind of mentioned that was not a great idea cause of the sound of the band. Ronnie decided he could go on without him. When ever you got something that works in a band, magical with the people in it you don’t do that.”

When asked about when he was asked to possible join Ozzy Osbourne‘s band during the Blizzard of Oz period (see video at 10:16), Appice stated: “Right before Sabbath a couple of months before I got a call from Sharon Osbourne and she was just starting to manage Ozzy and Ozzy wasn’t doing anything except partying. Sharon asked me if I wanted to go to England, I guess they heard my drumming somewhere and go meet Ozzy. hang out and see how it goes and possibly join the band. But I was like 20 years old. So I asked my brother (Carmine). I knew Ozzy was not the average guy, but Ozzy didn’t have a solo career yet; he was the singer they fired from Sabbath. Carmine said that the last time he saw Ozzy was at the Rainbow and Ozzy was eating spaghetti and Carmine turned around to talk to somebody and then he turned back to Ozzy and there was Ozzy sleeping in the spaghetti bowl. Who knows what would have happened if I joined? I always think I might have been on that plane that crashed with Randy Rhoads if I joined Ozzy. Who knows cause I knew Randy before we were friends.”