Sleaze Roxx caught up with Ruby Rockets‘ bassist G.G. Snaps to find out more about the band’s history and whether there might be a chance that the group reunites in the future.

With respect to the history of Ruby Rockets, Snaps stated: “Ruby Rockets formed as a result of two groups simultaneously seeking similar members. Guitarist Kelly Charles and myself were in Ohio recording demos and auditioning members for what we hoped would be the most outrageous glam metal band to ever come out of the Midwest — Sleaze Patrol. Meanwhile Kerri Kristen (drums) and Mykii Lash (vocals) were in North Hollywood trying to round out the Ruby Rockets line-up. I grew impatient with the talent pool in the Midwest and was actually going to California to audition for the Tryx bassist slot and for a band called Mystery Girls. Mind you this is all before smart phones or even the internet for that matter. By the time I got to California, Tryx had decided to call it quits all together but I started talking with Kerri and Mykii and loved where they were coming from.

Mykii had the vision of a band that had irresistibly catchy songs with an over the top yet incredibly polished sort of post-punk look. Musically, our influences were Cheap Trick, Candy, the Ramones, Buzzcocks, Bay City Rollers, The Babys. We wanted to pick up where Tryx left off, they had incredible harmonies. We also admired the purple haired Zeros‘ harmonies and live energy. Mykii’s charisma was unrivaled by anyone in Hollywood at that time and we were 110% dedicated to blowing up the scene with our sound, look and style. Ruby Rockets was a metaphor for a one hit wonder/shooting star. Mykii Lash had a long obsession with bubblegum one hit wonders; and using the success achieved by having one huge hit to build an entire career in the industry. This never came to be for Ruby Rockets as a band or for Mykii as an individual.

Snaps continued on stating: “Ruby Rockets didn’t get signed or even come close and didn’t really release any material. We made a four song demo but very few of those cassettes were actually passed around. I don’t even have one and haven’t had any luck finding it. We did pay way too much to have a professional video of our first show at the Roxy opening for the mighty Wikked Gyspy. I’m really glad we did or there would be even less documentation of Ruby Rockets‘ mysterious existence. We did play in front of a bunch of label executives at the Troubadour once when us and the Brats opened for the Glamour Punks‘ label showcase. What an unimaginably crazy night that was! All these suits fearfully being held captive in the balcony to a sold-out die hard Glamour Punks audience. They had no idea what to make of it! I turned 21 that night and the bartender was pissed because she’d served me previously!”

Video footage of Ruby Rockets‘ live at Gazzarri’s on the Sunset Strip:

Snaps was asked what was it like being a part of the Sunset Strip to which he replied: “Being a small part of the Hollywood scene was a blast. It was extremely hard work just to survive but I wouldn’t trade that experience for anything. We were all so young so our resilience made it more than bearable. It made it fun. This was the very early ’90s and the scene was saturated at that time, but that’s nothing you don’t already know; but we weren’t going to let that stop us. There were so many bands we actually snottily tossed around a lot of stereotypes within the Hollywood rock/metal scene. There were the wool-hairs, the Led Zep wannabes, the bozo-rockers, plaid grunge band waggoneers, the Hey Hey Hey Tonight bands, etc. It was pretty immature to make fun of the bands that were emulating the same ’80s hair scene that seduced us in the first place but it was all a fairly innocent fun attempt at building our confidence up enough to be able to take over the scene in as little time as possible. We made fliers to announce we were coming soon and passed out thousands of them for over a month before we’d booked our first show. We built hype and back then hype sold tickets, and you needed to sell tickets to financially survive the paying-to-play. We became such good salesmen we actually made money selling our tickets, but bottom line was that we wanted to play in front of large crowds, not be salesmen.

We saw countless bands show up, get on a bill, not sell any tickets and then have to cough up thousands just to play. There’s nightmare stories of bands having their gear held for ransom by promoters. For me, in retrospect, my favorite thing about being in Hollywood at that time were the friends I made who I still have to this day; and of course being able to perform with and see so many legendary bands that others only dream about having had the opportunity to see. Our little existence was after Tryx disbanded; when Swingin’ Thing, Blackboard Jungle, the Zeros, Wikked Gyspy, and Glamour Punks were kings of the Strip. Legendary unsigned bands like Stars From Mars, Kerry Doll, Cherry Street and Liquor Sweet were all already gone by then. We sort of hung out with the above-mentioned as well as Brats (who became Candy-Hateful), Queeny Blast Pop, Seaweed Eaters, Rebel, Babydolls/Krayola Kids, Fraidy Cat, No Sympathy, Strawberry, Fizzy Bangers, and Big Bang Babies of course. 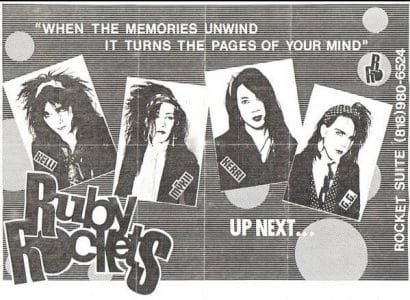 Big Bang Babies were kind of our arch nemesis at the time. They were all blonde and uplifting and we were all black and uplifting. We both debuted in Hollywood the same night at different venues. They opened for Swingin’ Thing at the Troub and we opened for Wikked Gypsy at the Roxy. I don’t know about their show but I can say, with video evidence, that the audience was loving it at our sold out show. It truly was a friendly rivalry, unlike watching Legs Up and Ana Black beat the pulp out of each other on more than one occasion. Other bands like Alleycat Scratch, Wicked Jester, Slamhound and Foxy Roxx were really new then too. Even after Ruby Rockets, more bands were coming on the scene like Heart Throb Mob (Lonny was and is a great friend of ours), Revlon Red, Guttersluts, Peppermint Creeps, etc. The lists go on and on and I know I’m forgetting to mention some but it gives you an idea that there were a whole number of ‘scenes’ under the one umbrella that was Hollywood.

In regard to why Ruby Rockets ended up disbanding, Snaps commented: “From the time we hit the scene to the time we disbanded, the number of people hanging out on the Strip dwindled dramatically. In a very small window of time, it felt like the city and the scene turned its back on everything affiliated with the Sunset Strip. I applaud the bands who hung in there the longest; and I’m thrilled by today’s thriving Scandinavian scene and that bands coming out of there are bringing the genre back into the limelight. That was not the case at that time. Rock clubs started limiting the number of nights they’d have shows and instead started having DJ’s. Ruby Rockets saw what was happening. Most of us did anyway. Ruby Rockets had remarkable momentum but there were differences of opinion in what direction we should let that momentum take us. The end was the perfect exemplification of the old adage, “it’s better to burn out than to fade away”.

After Ruby Rockets, a couple bands — Demolition Dolls, Darling Dead/Darling Died Suicide — were lucky enough to have shared the stage with Kerri Kristen. These days, he’s a legend among unsigned Hollywood drummers. Most recently, Kerri is in the much anticipated Blakk Widow. Kelly Charles and I went back to our Sleaze Patrol demos and were going to go back to our metal roots and attempted to start a thrash/glam band we were calling Shoot To Thrill. It never got off the ground. Kelly went on to record one album with Eddie Starr and the Zero Effect. Mykii Lash attempted to launch a solo pop career and went on to record some demos. I happened upon one of them on one of Glambone’s podcasts — a song called “Velvet Kisses.” He since went back to being a drummer. He used to be the drummer in Tommyrot and was actually in a modern version of the ’80s band Berlin for a short time. Last I heard, he was DJ’ing in Los Angeles under the moniker DJ Minxx — I think! Nowadays, I play keyboards in ’60s sci-fi influenced new wave-ish garage band called the Monster Women.

Finally, Snaps was asked whether there has been any thoughts of doing a Ruby Rockets reunion to which he stated: “I’ve thought about it. I think about it. I’ve been to Blackboard Jungle reunion shows and they’re a blast. I’ve talked to Kerri about it. I think we are both on board. One night several years ago, Mykii and his brother called me and we even talked about it. I would love to because the songs are so fun to play, and most of them stood the test of time. Kelly lives in the mountains in Tennessee and Mykii may be in the Downey area of L.A. — if anyone out there knows their whereabouts, shoot me a message so I can ask them about a reunion show, and/or at least so we can release what little material we have. It’s like the song says, “Where do all the Ruby Rockets go?” Who knows, maybe this article will be the magic needed to make it happen.”