Liv Sin is best known as the singer for the now defunct Swedish powerhouse metal band Sister Sin but at one point, she was also the singer of an all female band emanating from Sweden and called Hysterica. Liv Sin reportedly went by the name Sinderella while in Hysterica and as the singer on the group’s demo released in 2006.

Wikipedia describes Hysterica as follows (with slight edits): “Hysterica is a heavy-metal band from Stockholm, Sweden. The band was founded in 2005. They recorded their first demo in 2006 which met with critical appraise. After several years of playing live gigs they finally released their first album MetalWar in 2009. Besides Sweden, Hysterica have toured in the Netherlands, Belgium, Germany, the UK and Russia. They performed at the 2009 Sweden Rock Festival. The band won the award for Newcomer in the Swedish Metal Awards in 2010.” Liv Sin is noted as a past member of Hysterica under the name Sinderella (Liv Jagrell).

Back in December 2014, Liv Sin was interviewed by Metal Rules and asked about her time in Hysterica to which she replied: 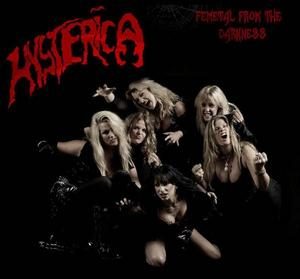 “Actually I was in Sister Sin before Hysterica, and I joined them when I moved to Stockholm and had some more time for playing music. After a while I came to a point where I couldn’t keep up with two bands so I had to choose one, and my choice was Sister Sin since I’ve been with them for a longer time and also it was more of my music style.”

They came from hell to raise the dead. They came to rule the world. This is the heavy femetal band you will never forget. THIS IS HYSTERICA!