With respect to its number one selection of Tommy Thayer, Vinyl Writer Music indicated:

“Tommy Thayer has had an interesting career trajectory. In the 1980s, Tommy was a truly unsung guitar hero with the criminally underrated band Black ‘N Blue. As one of the founding members, alongside his lifelong friend and cohort, Jaime St. James, they put out four truly outstanding albums between 1984 and 1989 before Black ‘N Blue came to an end. In retrospect, it’s mind-boggling how both Tommy and Black ‘N Blue could have been so overlooked seeing as they had it all in an engaging, energetic frontman in Jaime St. James, and a truly badass Rock ‘N’ Roll guitar player in Tommy Thayer. I suppose, you can be in the right place, at the right time, and have all the ingredients and still not hit the mark. In any event, in the late 80s, Gene Simmons would produce Black ‘N Blue’s two records Nasty, Nasty, and In Heat, and it was here where Tommy Thayer‘s career trajectory truly began to change. These two records were nothing short of a showcase for Tommy’s Blues-inspired turned Metal riffing, which paired perfectly with his penchant for releasing bursts of absolutely vicious and explosive solos over those riffs. I dare anyone to go back and listen to “Nasty, Nasty,” and tell me that Tommy was anything less than a man on fire there.

After leaving Black ‘N Blue, Tommy would go on to work with KISS as a songwriter on their Hot In The Shade record and handle the production as well as lead guitar work for Doro Pesch’s Doro album. As the 90s wore on, Tommy stayed within the KISS fold re-teaching Ace Frehley’s his parts when he rejoined KISS in 1996 for the Reunion Tour and even recorded all of the 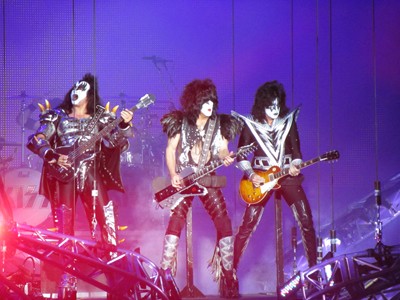 lead work for the group 1998 “reunion” album Psycho Circus as a ghost player, which if you haven’t heard it, you should. For me, knowing that Tommy plays on this truly excellent record only adds to his understated legacy. As the decade turned over into the 2000s, and Ace Frehley departed KISS once again, Tommy finally took his place in the limelight as the official lead guitarist of KISS, a position that he has held down since 2002, making him the longest-tenured lead guitarist in the band’s storied history. Some say that Tommy only, “Plays the part of Ace in KISS,” but the reality is simple– not just any guitarist could fill the void as the lead guitarist of KISS, and Tommy Thayer does it with style, skill, and with respect to the legacy of the band.

Like it or not, Tommy Thayer’s own legacy within KISStory is cemented firmly in place. Furthermore, his standing within the anals of Hard Rock and Heavy Metal is sealed as well, seeing as his work with Black ‘N Blue is retrospectively thought of as some of the best and most consistent of its era. Tommy Thayer plays the guitar the way it’s supposed to be played, with heart, soul, and ever-burning respect for the song, coupled with immense skill, and downright ill-tempered, swagger-laden licks. I’ll leave you with this…when I spoke with Black ‘N Blue frontman Jaime St. James, he had this to say about his old friend, “I tell everybody, Tommy is one of my favorite all-time guitarists. And I’ll tell you, I mean, he really has a feel. I mean, the way he can play rhythm and I know the guy can pick up anything, there were a lot of times he would just lay it down and make it look easy. It was great for me because it opened my mind up. I remember singing him riffs that he would just hold it down perfectly. Tommy is a great guitar player. He knows all these chords and is really cool to write with. You know, before I’m done with this life, I’ll write with him again.” If that doesn’t tell you all you need to know, I don’t know what does.”

You can read the rest of the article at Vinyl Writer Music‘s website.