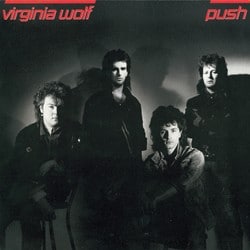 After years of struggle in their hometown of Manchester, Virginia Wolf eventually scored a record deal with Atlantic Records and quickly recruited drummer Jason Bonham (fresh from a stint with Airrace, another of the era’s brightest hopes) to record their debut album. Produced by Queen drummer Roger Taylor, the album hit all the right buttons and garnered critical acclaim with ease. The Virginia Wolf debut album, originally released in 1986, is regarded as a milestone in melodic hard rock, relying heavily on gifted song writing, together with the stunning vocals of Chris Ousey, a man with one of the most identifiable voices in British rock. It is a simply breathtaking offering.

‘Push’, Virginia Wolf’s second, was delivered to a market that was rapidly changing and by a company that was, in the main, looking to make quick scores. Produced in San Francisco by Kevin Elson, a man who was at the time experiencing huge success with Europe’s ‘The Final Countdown’, the record presented a far more mature approach to their craft. Once again, the songs were magnificent, the production being equally as exciting and the arrangements beyond reproach but with a record tailor made for the American market. Looking back, it’s almost inconceivable that such a work of brilliance was cruelly overlooked and allowed to languish. Truly a magnificent and brilliantly crafted record which still sounds wonderfully fresh today.

Both albums can be purchased at www.rockcandyrecords.co.uk.