Former Dio and Whitesnake guitarist, and current Def Leppard, Last In Line and Riverdogs axeman Vivian Campbell was recently interviewed on the podcast Rock Talk with Mitch Lafon where he addressed his tumultuous relationship the the late great Ronnie James Dio. 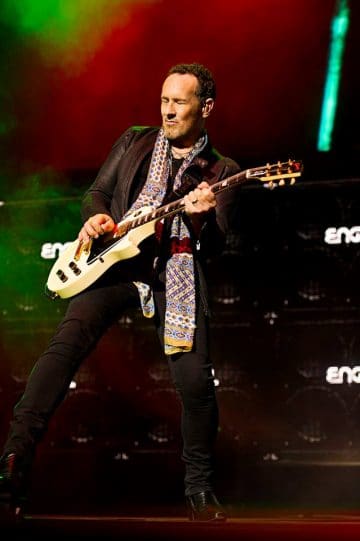 Campbell is noted as saying (as transcribed by Blabbermouth): “In many ways, I’m kind of saddened that Ronnie and I never had a chance to make it up… Because I know that there was a part of Ronnie that was really dark and really angry, but I know that there was another part of him that was really sweet and forthcoming. And I think that under the right circumstances, Ronnie and I would have sat down and had a beer and made our peace and we could have even worked together again, and it would have been great. But, you know, there’s a lot of gatekeepers in this industry, and one of the things that they do very, very well is keep people apart. So it wouldn’t have happened as long as those gatekeepers were there. That’s my point.”

In an interview with Shut Up & Rock On on March 4, 2017, Campbell explained how his time ended in Dio as he stated: “Well I was the thorn in Dio’s side. When the band was formed, that night in September ’82 in London, Ronnie kind of sat us down once we played, and this was the first time we all met and played together, Ronnie sat us down afterwards and he was super excited with what he was hearing. He said here’s the story…and he kind of explained to us that he had left Sabbath with Vinny and that he had a record deal and that we were gonna call the band ‘Dio’, for obvious name recognition. And that we would all be writing the record together, and he said there was going to be no money in this- you’re literally going to get a hundred dollars a week, which we did. But he said that if this project is successful by the third album, we’ll make it a completely equitable situation. That’s the thing I never let go of, and people make it kind of a nutshell thing about money. It was never about money, it was always about principle to me, you know? I am a man of my word. When somebody looks me in the eye and shakes my hand and we have an agreement, I’d honor my end of the agreement. In a nutshell, the Dio’s did not honor their end of the agreement.”