Campbell stated: “The Def Leppard rider is sumptuous, with organic veggies and expensive wines, and so on. Leppard play in big sold-out arenas around the world and as we have a couple of vegans, two meat-eaters and one in-betweeny (me), we have a very complex and detailed rider.

“We also have a dedicated dressing room/wardrobe person who goes into the venue in the morning and tarts up the rooms before we arrive with drapes, rugs and lamps to make them look less like the locker rooms they really are and more like your living room at home. Such a luxury!

“Last In Line‘s rider is basically a six-pack, a cheese sandwich, and, if we’re lucky, a clean towel.” 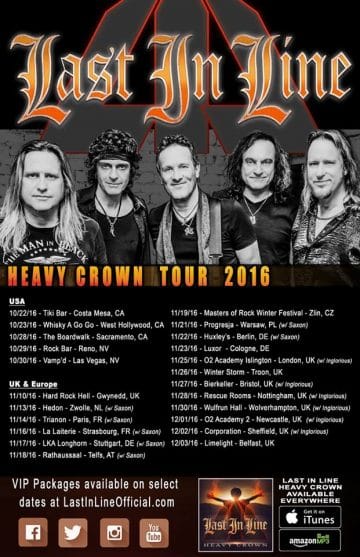 Campbell also compared his tour rig when he was out touring with Def Leppard or Last In Line. Campbell stated: “My Def Leppard rig is massive and complicated with loads of buttons and flashing lights and I have absolutely no idea how any of it works. It sounds pretty good, however. My Last In Line rig is a Les Paul, a cable, a splitter box, two Engl heads and two speaker cabs. It’s so simple that even a guitar player could set it up. As an added bonus, it sounds incredible! Less is very much more.”

You can read the rest of the interview with Campbell at MusicRadar.

In other news, Last In Line announced a number of USA tour dates in advance of their upcoming Europe/UK tour.

Last In Line—the band that features current Def Leppard/former Dio guitarist Vivian Campbell, former Dio/Black Sabbath drummer Vinny Appice and vocalist Andrew Freeman (Raiding The Rock Vault/Offspring) have confirmed five USA concert dates for October before they head out on a UK/Europe tour. After memorable appearances at the Loud Park Festival in Japan and Rocklahoma in the USA, requests came soaring in from fans, demanding that Last In Line play more stateside shows. To round out the line-up bassist Phil Soussan (Ozzy Osbourne, Vince Neil) has been enlisted after original Dio bassist/original Last In Line member Jimmy Bain passed away.