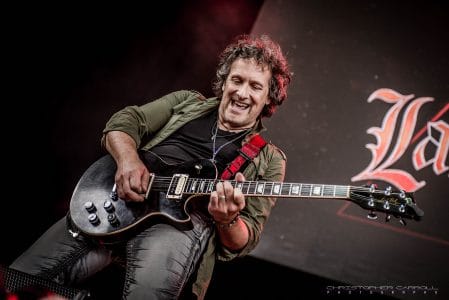 Campbell was recently interviewed by Metal Express Radio and spoke about Last In Line using the Dio blueprint but not sounding exactly like that band.

Campbell advised (with slight edits): “If we’d gone with a Ronnie soundalike, it would have been tacky and we would have painted ourselves into a corner and there would have been no chance for the band to grow. That’s another reason why I’m getting excited about this is that we’ll have more of a chance to play our original music. We’ll still play some of those Dio classics and it’d be stupid not to but most of the show will be based around original Last In Line material but we will always play “Holy Diver” and the song “Last In Line.” I remember on the Holy Diver tour with Dio, we were going out and most of the set was made up of Rainbow and Black Sabbath songs. By the second tour, we were able to play more Dio songs so it became less of a tribute show. We still did a couple of Rainbow and Sabbath songs but most of the show was Dio stuff. We’re already planning on playing at least two new songs before the album is even released when we start touring in January.”

In terms of how Soussan has fit into Last In Line, Campbell opined: “He’s fit in very well. In many ways, he’s very similar to Jimmy. In other ways, he’s very different. One of Jimmy‘s great strengths was he was a very simple player who had great tone and the way he locked in with Vinny. Phil is more intricate and is a bit more busy so if you imagine how Geezer Butler plays with Sabbath, John Entwistle with The Who or Noel Redding with Hendrix. He’s come up with a lot of ideas for this record. We did it very much like Heavy Crown. Nobody brought complete songs but we all brought ideas and riffs and we worked on them together. I told Phil not to bring complete songs as if we’d done that, it wouldn’t have the same organic growth that Last In Line does have. That’s how we wrote in Dio too. We didn’t bring songs in. We brought in ideas that we bounced off each other and grew the songs from there. It’s worked every bit as well with Phil as it did with Jimmy. While Jimmy was more laid back and let the music do the talking, Phil was more A-Type. Phil was more forceful with his ideas and a couple of times, I had to pull him to one side and tell him to slow down. He’s very quickly found his role in the band and adapted to the way we write.  Phil turned out to be an inspired choice. We played with a few bass players before Phil and one or two were really famous too but as soon as Phil played we knew he was the right for the band.”

You can read the rest of the interview with Vivian Campbell at Metal Express Radio.