All-female rockers Vixen are making history as they officially announced after their performance today at Rock The Arena II at Savage Arena in Toledo, Ohio, USA that they have a new guitarist Britt Lightning and keyboardist Tyson Leslie. 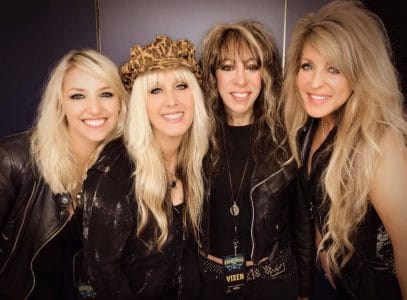 Lightning is replacing guitarist Gina Stiles who played with Vixen in 1997-98 and again in 2013 when she replaced deceased long-time guitarist Jan Kuehnemund.

According to Lightning‘s Facebook page (under the name of Brittany Denaro), she has previously played guitar for La Banda de Alejandro Sanz, Chic 6 – The Musical and Rachel Platten.

“Vixen‘s Biography on their Facebook page states (which needs to be updated to mention new members Lightning and Leslie):

“THERE’S ONLY ONE ALL-FEMALE HARD ROCK BAND FROM THE 80’S WHO: 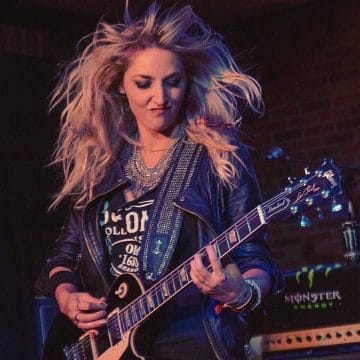 Vixen was founded in St Paul, MN by guitarist Jan Kuehnemund. Driven by rock star dreams, like so many before her, Kuehnemund packed up her group and headed for Hollywood. Kuehnemund soon re-tooled the lineup to include vocalist Janet Gardner, drummer, Roxy Petrucci, and bassist Share Pedersen (Ross).

Vixen quickly built their reputation playing the infamous Sunset Strip and signed a major label deal with EMI. Vixen‘s first hit single, “Edge of a Broken Heart” penned by Richard Marx and Fee Waybill (The Tubes) blasted onto the Billboard charts fueled by heavy video rotation on MTV. Their self-titled freshmen LP garnered two more knee droppers with “Cryin'” and “Love made Me” both charting on the Billboard hot 100 top 40. It was the group’s live performances opening for the Scorpions, Ozzy and Bon Jovi that established Vixen as a premiere rock act to be taken seriously.

In 1990, “Rev it Up“, Vixen’s second LP produced the monster rocker “How Much Love”, scorching ballad, “Love is a Killer”‘ and the upbeat “Not a Minute Too Soon” cementing their reputation not only as formidable performers, but as hit songwriters. The group Vixen-ized their fans on worldwide tours with heavyweights Deep Purple and KISS, which fueled the international frenzy. 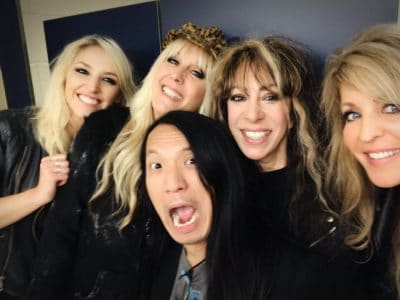 The undercurrents coming from the Seattle grunge scene helped strengthen the winds of change and underscored the decision to disband Vixen in 1992. Each band member independently dabbled in various projects until 1997 Gardner and Petrucci teamed up with guitarist Gina Stile releasing “Tangerine” under the Vixen moniker. In 2002 Kuehnemund once again regrouped Vixen with Jenna Sanz-Agero (vocals), Lynn Louise Lowrey (bass) and Kat Kraft (drums). This line-up then went on to tour and release “Live and Learn” and “Extended Versions” from a live performance in Sweden.

It was 2012 when Kuehnemund reached out to Gardner, Petrucci & Ross for their long awaited reunion. Sadly, only days before officially announcing the news, Kuehnemund was diagnosed with cancer and the reunion was put on hold. Jan Kuehnemund, the founding member and lead guitar player for Vixen tragically lost her battle with cancer and passed away October 10th of 2013. Jan touched many souls and will live on through her music.

Realizing that a band belongs to its fans, Gardner, Petrucci and Ross have called upon Stile to join them in continuing the Vixen tradition and honoring the fans.

The Legacy lives on…”