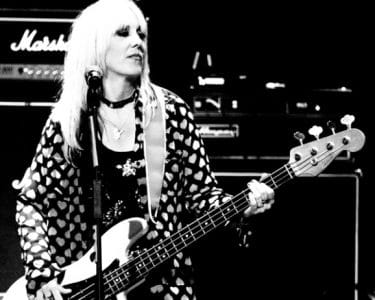 Vixen frontwoman Janet Gardner and bassist Share Ross were recently interviewed by Metal-Rules and spoke about the group’s upcoming new live album Live Fire, which will be released via Rat Pak Records on July 6, 2018. It was noted to the two Vixen band members that the group had never released a live album before.

Gardner stated: “We have lots of like really good live recordings from TV shows and different things, but we never owned the masters to them. We didn’t know how to get any of that. Now we’re not playing a lot, and we just performed a night in Chicago. It came out great and then with Michael Wagener, he mixed the live album, and then we did a new song from the “old-new” songs. It’s one that we used to play live, but we never recorded it.” Ross piped in: “I learned it when I joined the band. It was a part of my audition.” Gardner added: “It’s that old. Oh my God! We were really happy that that came out. We hope you all love it as much as we do.”

Ross confided: “For the record, I have to add that I have a secret live recording. It’s really good and its video. It’s three camera video, from the Musicians Institute in Hollywood. This is right before our first album came out. I think it’s like the spring of 1987. We do have something in the vault. I do have it all digitized.”

You can read the rest of the interview with Janet Gardner and Share Ross at Metal-Rules.