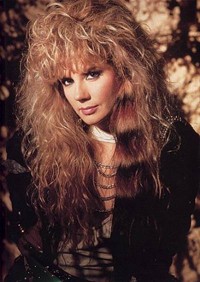 Vixen guitarist Jan Kuehnemund has passed away at the age of 51 after a yearlong battle with cancer.

Born Janice Lynn Kuehnemund on November 18, 1961, the musician founded Vixen in Minnesota and took the band to Los Angeles in the mid ’80s where they were hailed ‘the female Bon Jovi’. The classic line-up of Kuehnemund, vocalist Janet Gardner, bassist Share Pedersen and drummer Roxy Petrucci released two successful albums — 1988’s ‘Vixen’ and 1990’s ‘Rev It Up’. Singles such as “Edge Of A Broken Heart”, “Cryin'”, “How Much Love” and “Love Is A Killer” all charted on the Billboard Hot 100.

Gardner, Ross (Pedersen) and Petrucci, now playing together with Gina Stile under the name JSRG, revealed the sad news of Kuehnemund’s passing. “Much more than simply a brilliant guitarist and amazing songwriter, Jan was one of the kindest souls you could ever hope to meet. She remembered everyone’s birthdays and special occasions with gifts and was one of the most gracious women on the planet. Through her year long battle with cancer, Jan was very courageous. She never complained and never gave up. The cancer beat her body but it never broke her spirit at any moment.”

Vixen called it quits in 1991, however Kuehnemund resurrected the name in 2001 to undertake the Voices of Metal tour with Vince Neil. Eventually a stable line-up of vocalist Jenna Sanz-Agero, bassist Lynn Louise Lowrey and drummer Kat Kraft would emerge, resulting in 2006’s ‘Live & Learn’.

The current members of Vixen also shared their condolences today. “It is with profound sadness that we announce the sudden passing of Vixen founder and lead guitarist, Jan Kuehnemund, who lost a fierce battle with cancer on Thursday, October 10, 2013. Though most well known for her gifted guitar playing and other musical talents, Jan was a rare friend and beautiful in every sense of the word. Humble, thoughtful, loyal and kind, she was the most gracious of women, possessing the quiet strength of a true warrior. She genuinely loved and appreciated her friends and fans more than most could ever know. Those who were most fortunate to have known her and loved her are heartbroken at the loss of Jan, whose spirit will shine through her music eternally.”

While bad blood between Kuehnemund and the former original members of Vixen once existed, resulting in a copyright infringement suit being filed by the guitarist in the late ’90s, the musicians reunited for a VH1 Bands Reunited episode. However a full-fledged reunion was derailed by Kuehnemund’s cancer diagnosis.

The members of JSRG explain, “For those of you who wondered why Vixen never reunited, we actually did reunite. We had resolved our differences and were whole heartedly looking forward to playing together again. In January 2013, only days before the announcement was to be made public, Jan was given her cancer diagnosis. She requested that we keep her illness private and out of respect for her wishes when press and fans asked us why we were not back together, we replied “it’s a matter of timing.” Since then we’ve been in regular contact with her and offered our loving support while continually hoping to make 2014 the year of Vixen. However, it was not meant to be.”