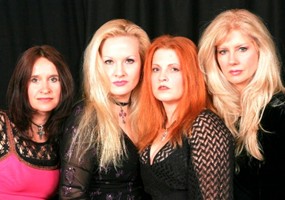 Vixen Gearing Up To Record New Album For 25th Anniversary

In late February Vixen started a fundraising drive in an effort to gather $35,000 towards recording a brand new album. However this week the female rockers cancelled their fundraising efforts because of a better offer — although receiving less than 5% of their $35,000 goal (a dismal $1,370) may have played a big factor in their decision.

Said the members of Vixen, “We are very happy to report that we recently received an offer that was too good to refuse, as they say, so we thought it was appropriate to cancel this project and focus on other opportunities. The good news is, as we have promised before, we will be recording a new album this year and we expect to release it in honor of the 25th anniversary of the release of the first Vixen album.”

Vixen was founded in Minnesota by Jan Kuehnemund, and brought to Los Angeles in the mid 80s where they continued to gig and build up an impressive following, finally cracking the big time in the late 80s. Two immense albums followed, ‘Vixen’ and ‘Rev It Up’, on their record deal with EMI, and the band toured constantly, including some prestigious supports to the Scorpions and Bon Jovi amongst others.

The band called it a day in 1991, although Jan reformed the band in 2001 to undertake the Voices of Metal tour with Vince Neil of Motley Crue fame. A few problems beset the band, not least the fact that the line-up changed completely mid tour. Once sorted though, the line-up of Jenna Sanz-Agero (vocals), Kat Kraft (drums) and Lynn Louise Lowrey (bass) remained strong and recorded ‘Live & Learn’, the follow-up to ‘Rev It Up’.

For more updates, Vixen news, and to sign up for The Vixen Chronicles (their monthly newsletter) visit on www.facebook.com/pages/Vixen/266438203422093, twitter.com/#!/officialvixen and www.vixenrock.com.