Vixen have recorded new single that should be out soon

Vixen‘s newest members — guitarist Britt Lightning and bassist Julia Lage — were recently interviewed by Sam Wall for SW Wall Interviews. The interview touched on a number of subjects including Vixen‘s upcoming new single and how Lage got into the band. The following are excerpts from the interview courtesy of SW Wall Interview.

Sam: “So I talked to Lorraine in June I think, and she said within the next month or two we’d have a Vixen single. Lorraine… you lied to me, but that’s okay.” 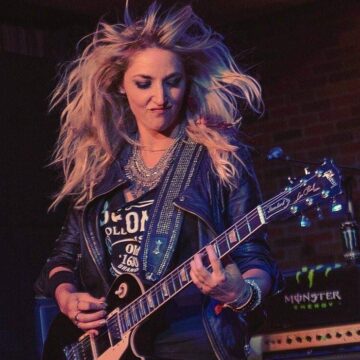 Britt: “Okay well that’s not her fault we all thought we were gonna have one, the mixer is busy with another project so his priorities are not straight either.”

Britt: “Yeah yeah. Ya know, I hate depending on other people cause then, ya know you’re at the mercy of them and their schedules.”

Britt: “But, it should be out soon! All of our parts are recorded and everything’s done so.”

Sam: “When did you first meet Julia was it when you (looking at Julia) joined?”

Britt: “No! I met Julia when I kinda first came out to L.A., we met at an audition actually. And then we didn’t exchange info or whatever and then we saw each other…”

Britt: “At Jerry Cantrell’s birthday party, what was that like a year later?”

Britt: (To Julia) “And you were like… oh you’re the guitar player! And I was like and you’re the bass player! And we had wanted to meet and exchange info and we just like didn’t cause that audition was so fast. And so then we exchanged info and we got together and jammed after that.”

Julia: “We did. We wanted to play together, we wanted to have a band together but it didn’t work.”

Britt: “But then she called me for a session, we did Alejandra Guzmán together. We recorded a live CD and DVD”

Britt: “At the Roxy, and so we did that. And um, and then yeah when I knew that we needed a bass player for Vixen… there was nobody better for the job than this one right here.”

Britt: “She is so crazy talented, she’s amazing.”

You can listen to the interview with Britt Lightning and Julia Sage on SW Wall Interviews below: