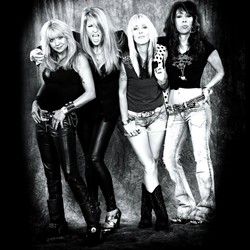 Singer Janet Gardner, drummer Roxy Petrucci and bassist Share Ross (Pedersen) have announced they are honoring their friend and bandmate, guitarist and founder Jan Kuehnemund, by performing as Vixen in 2014.

The band was committed to reunite in 2012 but Kuehnemund’s cancer diagnosis caused what was thought of at the time as a delay. Sadly however, after a fierce battle Kuehnemund succumbed to her illness in October 2013, thus the reunion was not meant to be.

After discussing the idea with friends and family, as well as lead vocalist from the most recent line-up, Jenna Sanz-Agero, it was agreed that it was the right decision for the three surviving definitive members to carry on as Vixen.

Singer Janet Gardner commented, “We’ve been hearing the fans ask for this and while it will never be the same without Jan, we believe in our hearts it’s what she would have wanted.”

Hits like “Edge Of A Broken Heart”, “Cryin'”, “How Much Love” and “Love Is A Killer” helped establish the group as one of premiere rock acts of their genre and the only all-female platinum selling ’80s rock act ever.

Joining forces with their JSRG bandmate, guitarist Gina Stile, Vixen will be performing at select festivals and showcase dates in 2014. The band’s first official performance will take place on the Monsters Of Rock Cruise, departing from Miami, Florida on March 29th. A full list of tour dates will be available at vixenofficial.com.