Vixen frontwoman Janet Gardner and her husband/guitarist Justin James were recently interviewed by Rock Pages chief editor Yiannis Dolas and were asked whether there are any thoughts about a second solo album to follow up Gardner‘s self-titled debut album that was released earlier this month via Pavement Entertainment. 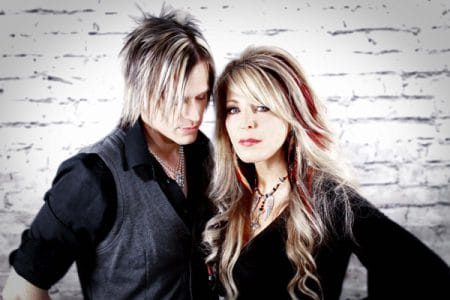 Gardner replied: “We can’t help ourselves. We are still creating things; we still have a few ideas ready to go. So, we are gonna tour a little bit in the States and play these songs to our fans and then I am sure when we get back we will start all over again (laughs). We loved the whole experience and it was so satisfying for both of us that we will definitely do some more.”

Gardner was asked whether she agreed that her debut solo album was more modern sounding to which she advised: “Yes, I agree on that. It has a lot of elements…some of the songs are more traditional rock than the others; they are more basic. The production is definitely modern but all in all, I guess it’s pretty straight ahead rock. We are both responsible of the sound on the album. Justin, definitely, is responsible of the overall guitar sound. He experimented with various guitar sounds and came up with some very interesting stuff. The rest of the production stuff, like the loops…we both came up with those. We experimented and we wanted to see if it fitted with the song. If it sounded great, we kept it…if not, we left it out.”

Given the more modern sounds on her debut solo album, Gardner was asked whether she was worried about the reactions from old school Vixen fans to which she stated: “Well, it’s not a Vixen album…it’s me and Justin. So I hope that they won’t think that it’s that different. Naturally, it doesn’t sound like Vixen. But I must say that there is a lot of stuff on that album that I truly believe that the Vixen fans will appreciate. I still have some of the 80s anthemic choruses in there so I guess they should all give it a chance and listen to it. I am sure they will find things they will love.”

You can read the rest of the interview with Gardner at Rock Pages.