Vixen singer and guitarist Janet Gardner has released a video teaser for her first ever solo album.

“***ATTENTION PLEASE****
Here is a little taste of my first ever solo album written, performed and produced by Janet Gardner and Justin James! Please LIKE, SHARE and ENJOY!!!!! THANKS FOR YOUR SUPPORT!
LOVE, JANET“

Guitarist Justin James describes himself on his Facebook page as a former songwriter/producer at iMachine Records and having worked at Capitol Records.

Vixen have not released a studio album since 1998’s Tangerine.

“Gardner became the lead singer and rhythm guitarist of the all-woman hard rock band Vixen. Janet joined the band’s early lineup in 1982. In 1984, the band appeared in the movie Hardbodies before moving to Los Angeles to further their career.

After some initial changes, the primary lineup of Vixen consisted of Janet, Jan Kuehnemund, Roxy Petrucci, and Share Pedersen. Vixen signed with EMI and recorded their self-titled debut album which was released in September 1988. Gardner described the pressure of recording as, “We were just girls from Minnesota and Montana who loved playing live, so it was a bit of a rude awakening.”

Their lead single “Edge of a Broken Heart” became their signature hit song. It was co-written, arranged, and produced by Richard Marx. Vixen would go on worldwide tours in support of Ozzy Osbourne, Scorpions, and Bon Jovi along with their own headline shows. Vixen recorded and released their second album “Rev It Up” in July 1990. They toured for another year alongside KISS and Deep Purple before the band split up in the middle of 1991 citing musical differences. 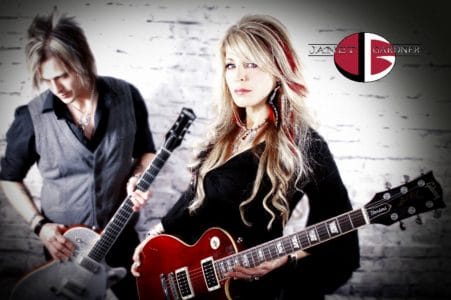 In 1997, Janet and Roxy reformed Vixen with Rana Ross and Gina Stile for a US tour. In 1998, Janet, Roxy, and Gina recorded a third Vixen album titled “Tangerine“. Tangerine would be a shift in styles going to a more late 90s grunge sound rather than the 80s hair metal sound of the previous two albums. Roxy Petrucci‘s sister Maxine joined the group for a tour until they were sued by original member Jan Kuehnemund over copyright infringement involving the use of the Vixen name.

In 2001, Kuehnemund decided to reform the band this time with Janet and Roxy, adding Pat Holloway on bass. The newly reformed Vixen toured the United States as part of the Voices of Metal tour until disagreements once again caused the band to split in the middle of the tour. Kuehnemund quickly replaced the band with three new members to finish the tour and they continued on under the Vixen name.

VH1 reached out to the original Vixen lineup in 2004 and got them to appear on the show Bands Reunited. The show featured a one-time reunion of the original group that aired in November 2004 coinciding with the re-release of the first two Vixen albums.

Janet mostly stayed out of the spotlight until making a few special appearances singing with the band Scrap Metal in 2010 and 2011. In 2012, Share Pedersen and Roxy Petrucci along with Janet reached out to Jan Kuehnemund about reuniting the original Vixen, however Kuehnemund declined stating that she was happy with her new band. Soon after, it was announced that Janet, Share, and Roxy would form their own band along with Gina Stile. They originally named the band “VXN” but decided to change it to avoid any possible lawsuits, thus they became known as simply JanetShareRoxyGina (or JSRG for short). JSRG began playing shows at the end of 2012, followed by touring on the Monsters of Rock cruise in March 2013. After a long battle with cancer Jan Kuehnemund died October 10, 2013.”