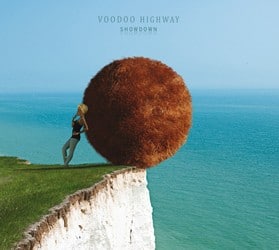 Voodoo Highway will stage a release party to celebrate their new album ‘Showdown’ on April 6 at Sala Estense in Ferrara, Italy.

After the success of their first album ‘Broken Uncle’s Inn’ back in 2011, the powerful quintet of Federico Di Marco (vocals), Filippo Cavallini (bass), Matteo Bizzarri (guitars), Alessandro Duo (keyboards) and Vincenzo Zairo (drums) are ready to strike the world with a massive amount of rock n’ roll once again.

‘If you never managed to drag yourself out of the seventies, still think shag pile carpet is the shit, Evel Kneivel is the daddy, and the 8-track is the future… then check out Voodoo Highway,’ raved SleazeRoxx.com in a review of ‘Broken Uncle’s Inn” while former Rainbow/Black Sabbath/Gary Moore bassist Craig Gruber defined the band as ‘the new Deep Purple’.

Known to most for their outrageous stage presence, crashing executions, a style that hovers between Ritchie Blackmore’s Rainbow and The Darkness, and for smashing instruments on stage, the year 2013 will see Voodoo Highway marching straight to Hell!