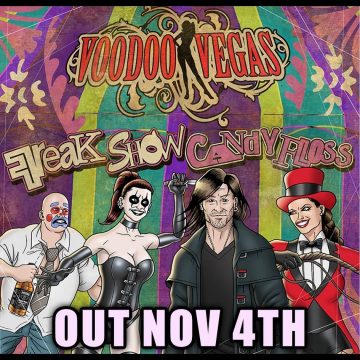 English hard rockers Voodoo Vegas have released a video for their new song “Killing Joke” from their upcoming new album titled Freak Show Candy Floss, which will be released on November 4, 2016.

Back in early 2013, Voodoo Vegas released their studio album The Rise Of Jimmy Silver, which went on to #7 on Sleaze Roxx’s Top Ten Albums of 2013.

Sleaze Roxx stated in its review of The Rise Of Jimmy Silver: “The vast amount of exciting new music being released by fresh faces these days is astonishing, and honestly hard to keep track of. The latest band to keep an eye on is the English quintet known as Voodoo Vegas. I first stumbled across this band in 2009 but was slightly disappointed to find out that their only available material was a live album — thankfully a true debut is now upon us in the form of The Rise Of Jimmy Silver…

The calendar has barely flipped into 2013 and thanks to artists like Voodoo Vegas, the list of must-own albums is already growing at a rapid rate. A healthy dose of ’80s sleaze crossbred with ’70s classic rock is what you will find on The Rise Of Jimmy Silver — an impressive debut album that should usher in ‘the rise of’ Voodoo Vegas.”