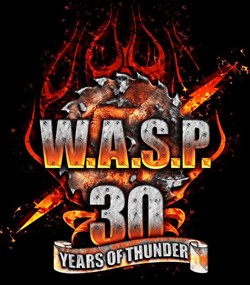 Twenty Nine years ago today, on September 21st 1982, W.A.S.P. played their first show at the Troubadour in Los Angeles.

On September 21st 2012 W.A.S.P. will begin the ’30 Years of Thunder’ anniversary tour starting in the United Kingdom and continuing worldwide!

This World Tour will be the biggest spectacle W.A.S.P. have ever created. The two hour show will consist of three parts. A one hour set will contain songs from the first four albums. The second set will be a 25 minute shortened version of ‘The Crimson Idol’ complete with the movie accompaniment. A third set will consist of material from the new studio album, older material and everything in between. This show will see multiple video screens, pyrotechnics, and elements from the early W.A.S.P. shows (maybe even an exploding cod piece) and Blackie’s moving microphone stand ‘Elvis’!

The ’30 Years of Thunder’ World Tour… this promises to be the greatest W.A.S.P. show ever!

Keep an eye on www.facebook.com/pages/WASP/163026404087 and www.waspnation.com for more info as and when it happens.