It’s been well documented over the years that Steeler bassist Rik Fox was part of W.A.S.P.‘s original line-up and came up with the band’s name. However, W.A.S.P.‘s band leader and long-time frontman Blackie Lawless has apparently not recognized Fox’s place in the W.A.S.P. history to the point that the W.A.S.P. Fans of Spain in Facebook are demanding that Lawless rectify this issue and recognize Fox‘s history in the band.

On his own Facebook page earlier today, Fox has reproduced the message (in Spanish) on the W.A.S.P. Fans of Spain‘s Facebook page and provided a translation in English with some edits. Fox‘s English commentary and translation is provided below (with further minor edits from Sleaze Roxx): 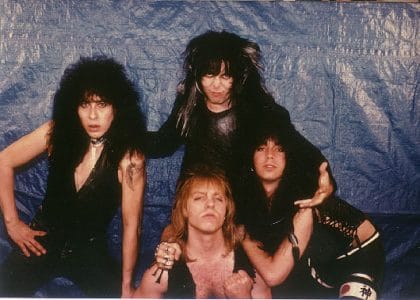 “Generously and graciously posted in the WASP fans of Spain Facebook group ???

With my compliments. (And a few interpretive corrections in the English version) ?

“RIK FOX AND HIS PARTICIPATION IN W.A.S.P.“

When we want to know the history of Wasp and its origins, we have at our disposal a series of documents such as the official biography of Wasp called “The Blackie Lawless Diaries” written by the same and published on the official Wasp page, at the same time translated by Rafa Basa on his website.

We have books like “Raw Meat” from our partner Jose Rojo, as well as the book “W.A.S.P.: A Sting in the Tale” by our friend Darren P Upton.

VHS as the “Videos … In The Raw” where Blackie goes through his history of the band and also so many articles and interviews throughout these 37 years of the existence of Wasp.

But if there is anything that gives truth to the story of Wasp, it is the story told in person by themselves.

And I mean that in Wasp Spain, we have had the great privilege of having several former members of Wasp.

Thanks to this, Wasp Spain has been a Club giving exclusive and innovative to what it refers to give information of first hand.

And is that Wasp Spain is a Club where thanks to former members, thanks to their managers, thanks to the people who have been closely linked to Wasp since its inception, and our recently disappeared friend Gina Zamparelli, and many promoters and professionals of our country where they have made several chronicles in magazines and renowned pages as well as being mentioned 4 times in radio programs.

And of course all of you, the members of Wasp Spain that everyone contributes its bit to create among all the aforementioned to be a prestigious Club.

Even Blackie Lawless knows of our existence.

With all this, our duty is to talk about certain issues that Blackie Lawless has decided to omit in history.

And as you can imagine seeing the title of the post, the participation of the bassist, great Rik Fox. Being excluded from the story by Blackie.

And then I’m going to tell you about Rik Fox‘s version of the beginnings of Wasp, collaborated by Chris Holmes and Randy Piper.

When Blackie Lawless talks about the beginnings of Wasp, it always begins in June 1982, when 4 months before, there was a series of very important circumstances erased from the band history, or rather, the story as told by Blackie Lawless.

At the end of the 70s, Blackie created 2 bands, which in a certain way was the same when he changed his name as Circus Circus and Sister.

After a short break, in 1982, Blackie Lawless had a series of new songs (some of them changing some details) with the idea of ​​doing some concerts but hoping to get a record deal.

For this, he recruited Tony Richards from the Dante Fox band, Randy Piper, who was already his partner before, and could not count on the short Joey Palemo to be a victim of some (gun) shots.

To cover his position, he contacted Rik Fox, who arrived in Los Angeles on February 4 from New York to audition.

Playing 5 songs like Hellion, B.A.D., On Your Knees, Sleeping in the Fire, and School Daze .

Once the audition was done (in 2 days, February 6-8), Blackie liked him so much that he told him that he was already part of the new band. A band that still called Sister.

At the same time, Fox helped him make the “Face the Attack / and co-writing the song Master of Disaster” for the first Demo tape.

Before all that, in March ’82, Rik Fox told Blackie that WASP would be a great name for the new project as a band, he even told him it would be a good idea to go out dressed like the Mad Max/Road Warrior movie.

At first, Blackie didn’t like the costuming idea … but liked the idea that Sister changed to the name of WASP, yes.

To the surprise of Rik Fox, for issues of Blackie at the end of May ’82, decided to dispense with Rik Fox, once promised to be part of the band, and even claim that he liked the way he played.

His excuse was that Randy and Tony were not happy with him. Something that years later Randy Piper declared that he said it for fear of Blackie.

Blackie Lawless demanded that Rik Fox give him everything related to him in his participation, like the band photos that I just said. But Rik got the photo negatives and secretly made more copies, something that annoyed and made very angry, Blackie a lot.

And in August 1982 they did 2 concerts as W.A.S.P., putting ellipses (periods) to not have a future demand (to avoid any legal issues from Rik).

To finish, as they say .. “Al Cesar what is Cesar” And Blackie Lawless not respecting and even erasing the story of Rik Fox.

When we all know the reality, a fight in almost 40 years that Rik Fox is proclaiming.

It is true that Rik Fox only played on a Demo and did not get to play with Wasp live before the public, but it does not mean that thanks to Blackie he took advantage of his ideas.

From Wasp Spain, we demand a rectification to the official version and that has not deceived us.

First to Rik himself, then to the Fans who owes us the truth told by Blackie, although in these 37 years we already know it.

We support you Rik Fox and we thank you for everything you did at WASP.”