In honour of the 25th anniversary of their critically acclaimed album The Crimson Idol, the shock-rock trailblazers W.A.S.P. are embarking on a UK tour performing the album in its entirety. The performance will include a set compromising of The Crimson Idol album accompanied by the film in addition to a handful of fan favourites. From what has become an almost annual visit to the UK shores, the band is set to visit towns and cities previously missed on former tours. Given the venues listed being substantially larger in size from 2016’s UK tour, you can expect a fuller stage show, in more equipped settings. 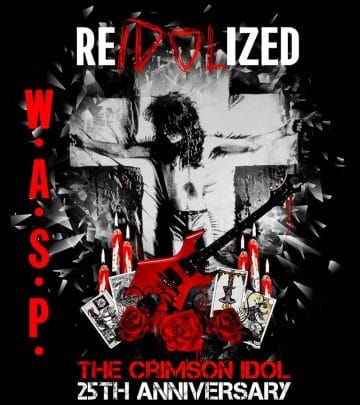 In addition, W.A.S.P. will be releasing a re-recorded version of The Crimson Idol along with a 50 minute DVD film of the entire story.

“2017 marks the 25th anniversary of ‘The Crimson Idol‘ – a classic that stands the test of that quarter-century, and was heralded at the time by both critics and fans alike.

Bringing the album up to date, Blackie Lawless and co will release a new re-recorded version alongside a 50 minute DVD film of the entire story. This will be the latest entry into the W.A.S.P catalogue since their new album ‘Golgotha‘ in late 2015, which saw the band “retain a level of credibility that precious few of their metal peers ever even aspired to, let alone achieved”, according to Classic Rock.

W.A.S.P will perform ‘The Crimson Idol‘ in full – accompanied by the film – followed by a second set of hits; the production and performance will be as powerful as fans have come to expect.”

Back in 2007-08, W.A.S.P. embarked on a world tour playing The Crimson Idol album in its entirety along with a handful of other W.A.S.P. classics.

The DVD film that will be accompanying the re-recorded The Crimson Idol appears to have been in the works for some time. In an interview with Ruben Mosqueda for Sleaze Roxx back on January 15, 2010, Lawless stated the following about the release of The Crimson Idol film: “We did The Crimson Idol Tour two years ago with the movie playing in the background and to answer your

question yes it will. It would seem fitting that it would be in a couple years that we do that for the 20th anniversary of the record. I’m not saying it will happen then but we will be releasing it in the future. It’s not finished, there’s a couple of things that need to be completed and then we’d need to edit it. There’s also quite a bit of footage that people haven’t even seen. For example when we shot the back cover of the album we did that inside the recording studio, there’s a big studio where we cut the live tracks that’s where we set up the shoot for the back cover, in that room. The next day we did a documentary that is about an hour long of me walking you through the studio; introducing you to the people that played and worked on the record and explaining how we got from point ‘A’ to point ‘B’. I stumbled across that thing about two years ago, I had forgotten all about it. It’s quite an interesting little piece because it’s almost like the making of the record. It’s something from a fan’s point of view that you’d find very interesting. All that stuff will be in there and it will literally take you back to the time where that record was released.”

Wikipedia states in part the following about The Crimson Idol (with slight edits): “The Crimson Idol is the fifth studio album by heavy metal band W.A.S.P., released internationally in 1992 through Capitol Records and on May 24, 1993 in the United States; a remastered edition was reissued in 1998, containing a bonus disc of B-sides and live material from 1992. The album charted within the top 40 in five countries. It’s a concept album, telling the story of the rise and fall of a fictional rock star named Jonathan Steel. Taking nearly three years to complete, The Crimson Idol was originally recorded as a Blackie Lawless solo album, but bandleader Lawless bowed to fan pressure and released it under the W.A.S.P. name.” 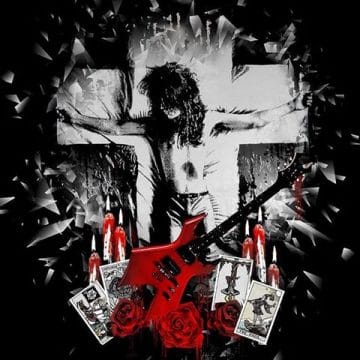