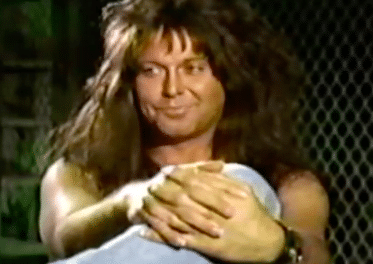 Mike Ladano has unearthed a vintage 1989 interview done by Erica Ehm of Canada’s Much Music with the one and only W.A.S.P. frontman Blackie Lawless. 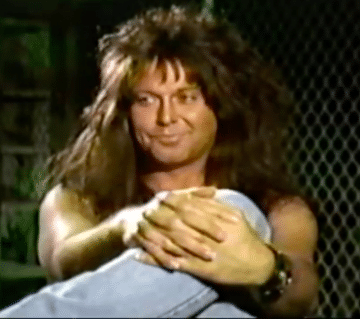 Erica Ehm asks Lawless about his thoughts on the documentary The Decline of Western Civilization Part II: The Metal Years and the performance of W.A.S.P. guitarist Chris Holmes in his infamous pool scene. The look on Lawless‘ face is priceless (see 3:50 mark of video) as he states (as transcribed by Sleaze Roxx):

“Oh yeah, it’s wonderful…. Errr, Penelope used to be a friend of mine and when we saw it — there were two segments that were shot. There was a piece that he did earlier in the day which was the part that was supposed to have been used. And then you have another section, which is what ended up in the film, of him goofing off in front of the camera men.”

When Ehm pointed out that Holmes was drunk, Lawless replied: “He was not drunk. I mean, when your mother is sitting next to you and you’re lying in a pool, he thought that he was going to be entertaining for the camera, him constantly being on stage right. And that’s what happens when you goof off and you get caught. We tried to get it yanked from the film and they gave us some jargon about how it had already been sent out and the prints were made so thank God it wasn’t Gone With The Wind or something where everybody could have seen it because I mean the message that we’re trying to put across with this record [1989’s The Headless Children] now totally contradicts everything that we are talking about. By the same token, the only thing that I want to say on this is get people to be a little more responsible for themselves because if I want to go out and have a couple of drinks, that’s my business. You know, I am not going to change my lifestyle for anybody but by the same token, I am not going to get on a freeway out here in a car and go kill somebody and his family. So if you’re going to have a good time, just be responsible. Don’t blow up the guy next to you. I mean, rock n’ roll is a great thing and you can have a great time with it but it’s like the ocean, if you don’t respect it, it will take your life.”

You can go to mikeladano.com for more information on the Much Music interview with Lawless in 1989.

Much Music interview with Blackie Lawless in 1989:

Erica Ehm was never gun shy with W.A.S.P., yet she helmed the best interview I’ve ever seen with frontman Blackie Lawless. It’s not a shorty either, so grab…