Wallner Vain featuring guitarist Will Wallner and singer Vivien Vain have released a lyric video for their first single titled “Johnny B. Bad” from their upcoming debut album Duel, which will be available later in 2022. 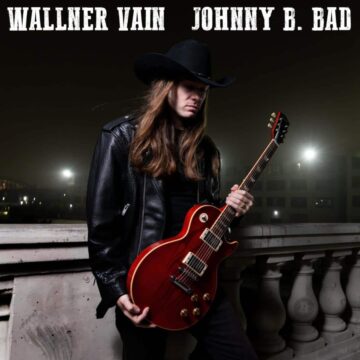 “Wallner Vain, consisting of British guitarist Will Wallner and Croatian vocalist Vivien Vain, has released the first single off their upcoming full-length release Duel. The single, “Johnny B. Bad”, is a shredding guitar driven track that’s sure to bring hard rock fans back to the Sunset Strip. With an old-school arena rock sound, “Johnny B. Bad” gives listeners the catchy guitar riffs and soaring vocals that they’ve been missing since bands like Motley Crue and Ratt ruled the radio. Wallner Vain has decided to release each track off of Duel as a single prior to the album’s official release later this year.

“Johnny B. Bad” is kicking off the countdown to Wallner Vain‘s debut record, Duel. “I wanted to write a straight up rock song based around a 12-bar blues riff”, says Wallner in regards to the opening single. “I came up with the title after realizing no one had ever used it before on a song. The artwork was taken by Alex Solca in downtown Los Angeles on a cold, misty night. We both felt this image perfectly captured the vibe for “Johnny B. Bad”.

The pair has decided to take a unique and uncommon approach to build anticipation for Duel. Vivien Vain states that “…after returning to Los Angeles in 2020 and moving into Lemmy‘s old apartment on the Sunset Strip, we had only one goal in mind – to record a great rock and roll record”. When asked about the backstory to Duel, she can relate on a personal level; according to Vain, “One of the main themes lyrically is the struggle musicians face when they try to ‘make it’ in Los Angeles. It’s something we’ve experienced personally and can write about it in an authentic way”. Musically speaking, Wallner takes the reigns in saying that with Duel, he wanted “not just a great rock and roll album, but a great ‘guitar’ album”. With influences such as Ritchie Blackmore, Eddie Van Halen and Gary Moore, he “wanted an album that would really showcase the guitar” and is proud of the fact that everything on Duel was recorded using a vintage Marshall on max volume.”