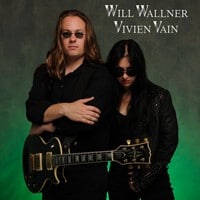 Los Angeles based hard rock artists Will Wallner and Vivien Vain will release their debut album on February 1st 2012. The release and promotion will be handled by Los Angeles based company ‘Metal Assault’.

Both in their early twenties, Will Wallner (guitar) and Vivien Vain (vocals) came to America from Europe to pursue a career in music. After a year of performing locally in Los Angeles they had a chance meeting with Carmine Appice and Vinny Appice at the Rainbow Bar & Grill on the Sunset Strip in 2010. Both agreed to perform drums for their album and since that first meeting the project evolved featuring several other guest session musicians with Will Wallner and Vivien Vain performing all guitars and vocals respectively. Their debut features nine original songs written and produced by Wallner/Vain.

The album cover features Wallner/Vain photographed by Glen La Ferman. A music video for the song “Streets Of Rage” will be released with the album, which was produced in Hollywood in September 2011. Wallner/Vain will announce live dates to promote their album release in the next couple of months.

For more information go to www.wallnervain.com.