Reinforcements have been brought in for the 10th year anniversary line-up of the M3 Rock Festival as Warrant (acoustic set, Stryper and Sebastian Bach join a star studded line-up which also features Cinderella‘s Tom Keifer, Kix, Queensrÿche and former KISS guitarist Ace Frehley at the Merriweather Post Pavillion in Columbia, Maryland, USA on May 4 and 5, 2018. 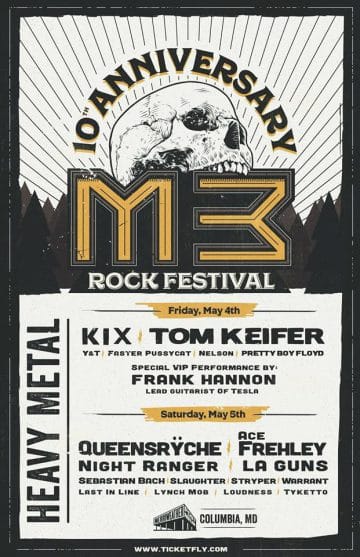 The following message was posted in part on the M3 Rock Festival‘s Facebook page yesterday:

M3 Rock Festival 2014 (Part Two of Day Two): “Although I am a big KISS fan, I am not that fond of their song “Shout It Out Loud” — having grown bored of it after hearing it a million times. However I found myself singing along loudly while the Christian rockers played their excellent and spirited version of the song. One thing about Stryper is that the band seems to have gotten heavier since reforming more than ten years ago. That was certainly evident in their choice of songs and the two new songs played at M3 — one of my favorites, “Legacy”, and the title track to their latest record ‘No More Hell To Pay’. Frankly, I am pleased with the band’s heavier direction having never been that much of a fan of their more pop-oriented ’80s version.”

M3 Rock Festival 2014 (Part Three of Day Two): “Bach displayed a lot of attitude, which was entertaining to see, and made me laugh at times — but it sometimes bordered on arrogance. For instance, he advised that he had been interviewed by “some guy” who asked him what was the difference between the state of metal in general between now and back in metal’s ’80s heyday. Bach‘s response was that they had sold out the Merriweather in 1989 and did it again in 2014, implying that there was essentially no difference between the eras. Do you really believe that Sebastian? If he truly did, he most likely would not have told the M3 audience that, “It is OK to like a new song!” after receiving a not overly enthusiastic response at the end of playing his new song “All My Friends Are Dead”. I’m pretty sure Bach did not have to say such a thing to an audience during the time that Skid Row released their first two records and performed new songs.”

M3 Rock Festival 2015 (Part Two of Day Two): “One big attraction for me in seeing Warrant was hearing their latest frontman Robert Mason sing live. I have always loved his singing including with Lynch Mob and particularly with Big Cock. I was intrigued to hear him sing the Warrant classics. While there is no denying that Mason has a great voice, I found him at times on this day to be a bit of an awkward fit for the Warrant songs. Mason did seem quite appreciative of the moment as he declared something along the lines that it was a privilege to keep doing this as “you guys keep showing up!”. Mason was also witty as he declared prior to “Heaven” that the crowd should be able to sing along given that there were the “easiest background vocals in the history of background vocals”.”