Warrant‘s guitarist Joey Allen has declared that the group has five songs demoed and a tentative album title for the band’s follow-up to its 2011 album Rocklaholic. 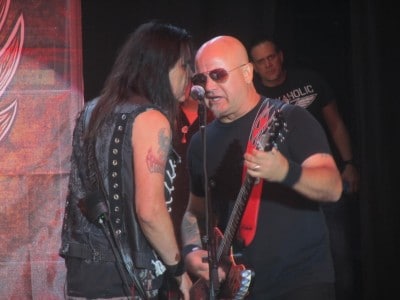 Speaking to Screamer Magazine at 2016’s NAMM, Allen stated: “We’re writing. Five songs are demoed. It’s great. We’ve got a title for the new disc — a tentative title — which I won’t talk about. It’s got to do with lips and something you can taste — something like that. It’s very tongue-in-cheek Warrant. But uh, yeah, the music sounds great. [Robert] Mason [vocals] sounds great. So we’re just in that mode where we had some downtime in between gigs to where we’re doing it. So hopefully sometime mid-summer, maybe.”

Sleaze Roxx stated the following in its review of Warrant‘s Rockaholic back in 2011: “Now don’t get me wrong, Rockaholic isn’t a bad album (far from it). Maybe the anticipation of a new album with Robert Mason on lead made it fall short of what I expected, but it has some moments — some really good moments. There are a lot of solid numbers, three ballads and one song that’s utter drivel. Warrant with Mason works well when it’s going fast, furious and in your face but slowing things down kills the energy and excitement that Mason generates and it happens too often here. The song placement also seems out of order, so to my ears the album doesn’t flow properly and makes it less enjoyable than what it could be. There’s a lot in here — early ’80s stuff, the classic Warrant sound, some Lynch Mob reminiscent numbers and it’s all mixed together… sometimes successfully, sometimes not.”