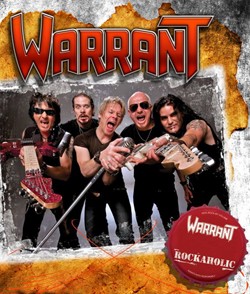 2012 was filled with many highs and lows for veteran rock band Warrant. They released ‘Rockaholic’, their first album with new vocalist Robert Mason, on May 13th and later in the year suffered tragedy when original frontman Jani Lane lost the battle with his demons. Despite it all, Warrant vows to continue, and as Mason revealed in a year-end update, the band plan on releasing “home” as the second single from ‘Rockaholic’ as well as begin writing new songs in early 2012.

Says Mason, “So, here we are, putting the finishing touches on another fun and ROCKAHOLIC fueled year in Warrantworld…

2011 has been great for us in many ways; we began by ringing in the new year with a show in Green Bay and soon after, had our new record (yeah, CD, digital download, whatever) finished and released by mid May. Recording with Keith Olsen ( which I did a lot of through the first half of the 1990’s ) was a blast, and his endless production wisdom and expertise never ceases to amaze me, and is an education in itself! The ever talented and hard working Pat Regan was slated to mix, and mix he did! Add one hysterical and awesome shoot with friend and legend photog Neil Zlozower, and Frontiers Records had their ROCKAHOLIC, tongue in cheek artwork and all.

In fact, the day we played the M3 Festival in Maryland, it was available for sale…OK, the day after, but let’s blame the shipper. If there’s one thing I’ve learned while fronting this band for the past 3+years, it’s that things happen, and we adjust/adapt/recover/readjust and rock out when the time is right. Highlights from M3:
1.Playing our mainstage set for all the fans.
2.Hanging with the Whitesnake guys (whom we supported later that year as well ).p3.Lengthy New Jersey reminiscing with long time friend Ed Trunk.
4.Picking up Sebastian Bach’s head up off the hotel bar, so I could reach the bottle of red wine & pour myself another glass after last call. Really.

That brings us to the Spring/Summer madness of seemingly endless air travel, late nights, fleeting shows (they never last long enough for me) and early wake up calls that some refer to as “The Tour”. We had the privilege to share the stage with many of our friends this past year; among them, some of the most memorable for me were Toledo, Ohio and Monterrey, Mexico in support of our buds Poison (I know; I dare you to find another paragraph with those two cities so closely together in any sentence).

Great venues, amazing people and hot sweaty rock shows- just the way I like it! On a bill like that, we don’t get to play too long, but we do our utmost to pack the setlist with what fans want to hear and we want to play, including a couple of the new CD’s songs. Personally, I get such a rush when we finish a good ol’ Warrant staple like Uncle Tom’s Cabin and the crowd goes frickin’ nuts, then I get the pleasure of introducing the fans to a new song like the ballad Home and they not only accept it, but I hear that same applause when it’s through!!! I will never be able to express how gratifying that is for me and my ” step brothers”.Firing on all rock cylinders, like our own personal American muscle car, we did what we love and got to play for some amazing fans in 2011, and hopefully made some new ones along the way… come, join us… hahaa!

This year had a somber, unhappy note as Summer went on; the passing of John ‘Jani Lane’ Oswald in early August. I won’t linger, more than to say for me it was the tragic end of a long lost friend, a talented man whose abilities I deeply respected gone way too soon, and although we in the band each have countless varied indelible memories of time spent with him (good and bad I will not lie), in common we mourn his untimely death, and wish the best for his children and those who truly love him. The band plays on, as they say, and every time I sing those songs , I do my utmost to do his memory justice. In my opinion, we should only celebrate his contribution and not focus on any negatives. There, I said it. May I now continue with the lighter stuff?

This band has 5 distinct personalities and that’s a challenge sometimes, but we always find a method to make the most of who we are together, and I hope to continue that “song” until they tell us to stop (whoever “they” are I have no idea).We get to do some really cool fun and unique things as members of Warrant. Hell, I got to do a cooking show with new bud Anthony Proffitt in South Florida (www.tasteofmusiconline.com) and pimp out our award winning 2007 Warrant Red Wine, the realized vision of Erik Turner and Kristian Story (www.artistwine.com), we Tweet a bunch of random stuff (@warrantrocks), and direct attention to our home base site (www.warrantrocks.com)! Gratuitous plugs, I know… here’s another; On Dec 15th I will be singing in the all star band for the 2nd year in a row at the KLOS Mark and Brian Christmas Show at the Nokia Theatre in LA (@markandbrian, @nokiatheatrela).

So, as we close the book on the year 2011, we set our sights toward next year with the highest hopes and rock dreams of having another “banner year” in the Warrant camp; we’re looking forward to the official release of “Home” as a second single and video. We’ll spend the first bit of 2012 writing songs, spending some long overdue time with family and friends, recharging our bodies and minds and gearing up for more shows and chances to interact with our amazing fans. I simply cannot wait…

All the best to you and yours for a happy and prosperous 2012, from us ROCKAHOLICS”