After apparently getting pushed out of Ratt in early 2018, guitarist Warren DeMartini will be performing in a “super group” called King of Chaos consisting of singer Dee Snider, Sebastian Bach and Lou Gramm; guitarist Gilby Clarke; bassist James LoMenzo; and, drummer Kenny Aronoff who will be performing at the RiverEdge Park in Aurora, Illinois, USA on June 22, 2019.

Let the chaos begin! Not just one, two or three, but SEVEN of the biggest names in rock are coming to RiverEdge Park to give you a killer once-in-a-lifetime show. They’ll rock you. They’ll give you a surge of adrenaline that will last weeks. They’ll deliver a concert made for head-banging. With an always-revolving roster of superstars, this could be the only time you see these guys play their biggest hits and classic covers together live on stage.

Lou Gramm (Original Member of Foreigner) – As the former lead singer of Foreigner, Lou Gramm is a thunderous musician with hits like “Double Vision,” “Cold as Ice” and much more.

Dee Snider (Twisted Sister) – This Twisted Sister front man was named as one of the top metal vocalists of all time. It’s Dee Snider. That’s all you need to know.

Sebastian Bach (The Original Voice of Skid Row) – He delivers just what you want from rock and roll: high energy, a love for the crowd and vocals that send shivers down your spine.

Warren DeMartini (Ratt) – This Chicago-born rocker, with a guitar that has a voice of its own, is just what you need. VH1 named him one of the most underrated hair-metal guitarists of the 80s. Come see him light it up in person.

Gilby Clarke (Former Member of Guns N’ Roses) – Having performed with one of the greatest rock bands of all time, Gilby knows a thing or two about rock. Hell, continuing to write those raw rock and roll songs is what keeps him alive.

Kenny Aronoff – What do John Mellencamp, Bob Seger, Johnny Cash and John Fogerty have in common? All of these rock ‘n’ roll superstars have performed with Kenny Aronoff as their drummer, keeping the beat in the studio or on the road.

James LoMenzo– He’s played for White Lion and Megadeth and is the go-to bass player for heavy rock, metal and any genre that needs a killer player that can shred a guitar like a piece of paper. 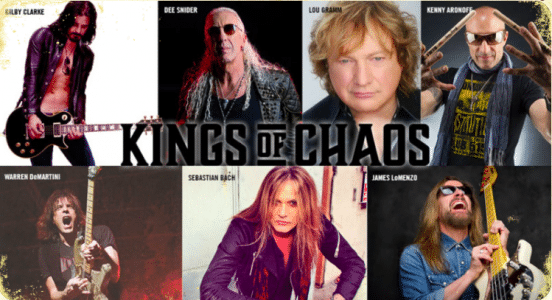