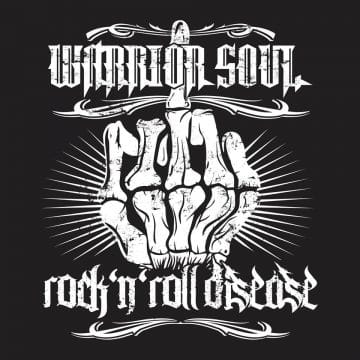 “Comin’ in again with all guns blazin’ – Warrior Soul have a new record set for release in May ‘19, affectionately called ‘Rock N Roll Disease‘. The album is the follow up to last year’s very successful and critically acclaimed, raw and raucous ‘Back On The Lash‘ release. RnRD promises to turn out to be a real stormer. “We are going for the same feel as ‘Lash‘ but honing it in more and picking it up a bit. ‘Back On The Lash’ was raw, fun and loose, this is too, but we are pushing it all over the top” says mainman Kory Clarke – Clarke is using the same writing and playing team in the studio as the ‘Back On The Lash’ release ensuring continuity and allowing him to keep hitting his current rich vein of form – tentative song titles include ‘Over The Top’ and ‘Off My Face’ – Oh yes, if you wanna start your Summer rocking, go out and get a ‘Rock n Roll Disease'”

Warrior Soul‘s “Back On The Lash” video:

Director Adam Dubin has done it Again!! Live in Detroit and out on the road with Kory Clarke and The Gang (Christian Kimmett Bass, John ‘Full Throttle’ and A…