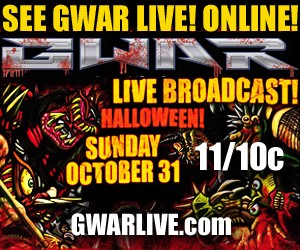 Every year on Halloween, GWAR takes to the stage to put on a spectacle that only certain fans in certain cities have gotten to witness. But this year, GWAR is giving human scum across the globe the chance to watch their Halloween show streaming live from The Rave/Eagle’s Club in Milwaukee. The event will be a Pay Per View extravaganza and is scheduled to kick of at 11:00 PM Eastern Halloween night. Make sure to head over to Gwarlive.com to sign up for the Pay Per View event of a lifetime today!

TheRave.com, is the online entertainment source for The Rave / Eagles Club, well known as one of America’s most haunted live entertainment complexes.

TheRave.com most recently streamed live concerts from Shinedown, Underoath, Benny Benassi, DevilDriver, Epica, Vader and others. These webcasts have been seen by over 100,000 people in over one hundred countries.

Contacted at a recent midget-juggling festival, held at an undisclosed (and completely fictitious) location, GWAR lead singer Oderus Urungus screamed what sounded like “Bllllaaauuggh”, before launching himself into a nearby Jagermeister display. Later, when fully conscious, the warty one sounded off about the Internet, inter-species dating, and golf, all in complete gibberish.

When he finally gave us a workable quote, it sounded something like this–

“People don’t understand how much money we are contractually obligated to waste everyday. That money has got to come from somewhere so we grind it out of our fans. Now if you are telling me that there is a way to do that without ever having to leave the city of Milwaukee? This Interwebnet fascinates me no end!”

In other GWAR news, the band has announced that they will be performing for the first time on network television on October 28th, when they take to the stage on “Late Night With Jimmy Fallon”. The shows airs 12:35 Eastern and the band will be tearing through their new single “Zombies, March!”

This past weekend syndicated radio show “Chaos With Full Metal Jackie” premiered the track “Gathering of Ghouls” from GWAR’s upcoming new album. Bloody-Disgusting.com premiered the first single from “Bloody Pit of Horror” “Zombies March!” Check it out at http://www.bloody-disgusting.com/news/music/1043

GWAR’s latest masterpiece “Bloody Pit of Horror” will be in stores on November 9th, but you can pre-order your copy today from the official GWAR page on the Metal Blade Records website at http://www.metalblade.com/gwar. The landing page includes all current tour dates, GWAR footage from BOTH Gwar.tv and MetalBlade.tv, and pre-orders for “Bloody Pit of Horror” on CD, a GWAR t-shirt, or the ultimate “Bloody Pit” package that includes the CD, the GWAR t-shirt, and a 12×12 autographed cover print!