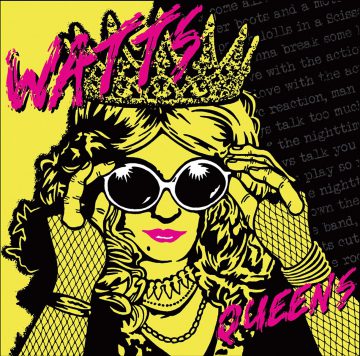 Boston, Massachusetts, USA rockers Watts have released a video for the song “Queens” which is one half of their new digital single released via Rum Bar Records.

Rum Bar Records’ principal Lou Mansdorf states: “Hear ye, hear ye, give us your ears and eyes for the rock n’ roll spectacle known as Watts. Their brand new single “Queens” is upon us, this is a rock n’ roll assault and revolution, lots of glam, lots of guitars, a rhythm section that thumps, and a groove that’ll make you shake. We also have an eye catching, sugar coated video to boot.”

Rum Bar Records‘ press release states in part (wit slight edits): “The band is back, they are not ‘All Done with Rock N’ Roll’, and we are here to unleash their rock & roll assault on to you with their brand new 2 song digital single “Queens” b/w “The Night The Lights Went Down”.”

Shot and directed by Harry McCoy at the Dover Brickhouse in Dover NH. A huge thanks to all the friends that came out and participated in this video. Was a bl…