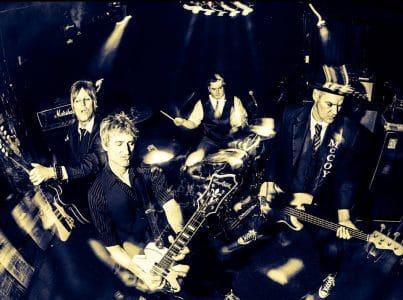 Boston, Massachusetts, USA rockers Watts have released a video for their track “She’s So Electric” from their full-length studio album The Black Heart Of Rock-N-Roll released via Rum Bar Records.

Sleaze Roxx stated the following in its review of Watts‘ The Black Heart Of Rock-N-Roll album and in particular the song “She’s So Electric”: “Many of the songs on this album are driven by the back end — bass and drums — which is refreshing. Certainly “Up All Night” and “She’s So Electric” are examples of that. Once it gets started, “She’s So Electric” in particular has a vocal line and beat that could have derived from Steel Wheels era Rolling Stones.” Sleaze Roxx concluded its review by stating: “It took me several spins to understand this album — the sound it was going for and what Watts are trying to accomplish. I’ve turned 180 degrees and determined this is a must-listen. It has its influences, but is not derivative. Watts doesn’t try to be anyone but themselves, and I give them credit for that above all else.”

Directed and shot by Harry McCoy with assistance from Max McCoy at Haunted Overload in Lee NH. More info on Watts: https://www.facebook.com/wattsrock/Get the…