Boston, Massachusetts, USA based Watts have released a video for their song “Up All Night” from their fourth album The Black Heart Of Rock-N-Roll, which was released back on June 10, 2016. 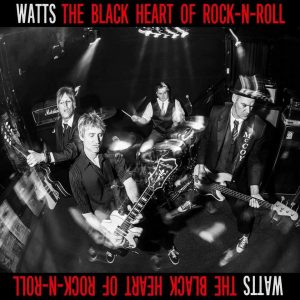 “Boston. Home to legendary household rock ’n’ roll names like J. Geils Band, Aerosmith, the Neighborhoods, the Real Kids, the Cars; and the city’s own namesake, Boston. Now, the legend gets even bigger when cocksure rockers/movers/shakers Watts return with their fourth full-length album. We’re sliding 10 brand new shots down the Rum Bar and into your ears. Featuring the made-for-radio leadoff single and video “Up All Night”, Watts takes you on a whirlwind wild ride from album opener, “The Black Heart of Rock n Roll” through arena-ready, guitar-heavy rockers “Strut (Like a Champ)” and “She’s So Electric”. There’s a nod to the pop side with “Bye & Bye”, Toys in the Attic grit with “Stage Fright”, a bit of Keef twang in “Fast & Loose”, and ode to the the 45 “The B Side”, and closing out with the blistering, arena rock show stopper “Bring On The Lights”. For this release, Watts dives deep into their record collections for inspiration from the likes of AC/DC, Cheap Trick, KISS, Stones and a whole lot more. These tracks are packed with blazing dual guitars (John Blout/Dan Kopko), a heart-pounding wall of drums (Johnny Lynch), punk rock sensibility, Stones swagger, a backbeat of fist pumping bass-lines (Tim McCoy), and screaming lead vocals from all four members. If you want the ROCK, you GOT the rock!!”

Watts‘ “Up All Night” video:

Watts – Up All Night

Classic Rock Magazine says: Rock is in a steep decline and, who knows, maybe it’ll be as dead as disco in a few years. But the beauty of Watts is that they…