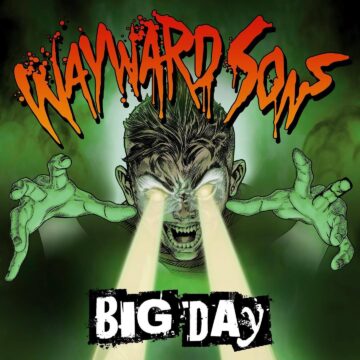 “UK hard rockers Wayward Sons have released a new single, “Big Day”, which is taken from their forthcoming third studio album – set for release later in 2021. “Big Day” follows the previous single, “Even Up the Score” that came out in December 2020. Watch the video below or stream/download it here: https://orcd.co/bigday

“Big Day” is a supremely infectious rock song that highlights all that has made Wayward Sons one of the most exciting new UK rock acts to emerge in years. Driving rhythms overlaid with Toby Jepson’s well known gift for creating a melody that lodges itself in your head. The single was again produced by Wayward Sons (Toby Jepson’s previous credits as a songwriter and producer include the likes of Katie Melua, The Virginmarys, The Answer, and Toseland) and Chris D’Adda (Nick Cave and The Bad Seeds).

Jepson wrote the song a couple of years ago as a way of discussing modernity’s obsession with the need for immediate appetite fulfilment. However, as we all anticipate the exit from Covid restrictions, he observes “there is a renewed sense of anticipation that is wholly justified as we consider what we have missed and are looking forward to getting back to. We are indeed all looking forward to that BIG DAY…”