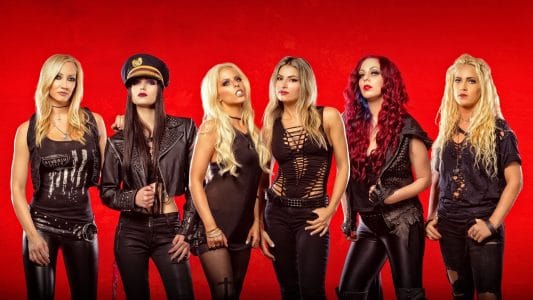 The new group We Start Wars featuring Nita Strauss on guitar, Alicia Vigil (Vigil Of War) on bass, Seana (a.k.a. Shauna Lisse) on vocals, Nicole Papastavrou on guitar, Katt Scarlett (Femme Fatale) on keyboards and Lindsay Martin on drums, have released their first song entitled “The Animal Inside.”

Revolver Magazine notes that Strauss stated the following about the band’s name: “A phrase I heard years ago has always stuck with me: ‘Some of the greatest wars in history were fought over a beautiful woman.’ I’ve always been fascinated by the idea of the female warrior, someone who fights her own battles and doesn’t take shit from anyone, and equally fascinated with the concept that a woman’s love or defending her honor would be worth so much that people would actually put their own lives and the lives of others at risk over it. The most famous story everyone thinks of first is of course, ‘The face that launched a thousand ships,’ Helen of Troy. But there was also Cleopatra and Marc Antony, Attila the Hun‘s invasion of Rome, Richard the Lionheart rescuing his sister Joan of England during the crusades, General Wu Sangui‘s betrayal, which led to the downfall of the Ming Dynasty in the 1600s, and the Celts uprising against the Roman Empire in AD 60. The list goes on and on. So that’s the story behind the name—We Start Wars represents not only the battles that women face in daily life, but also the battles that have followed them throughout history.”

We Start Wars‘ “The Animal Inside” song:

WE START WARS- The Animal Inside