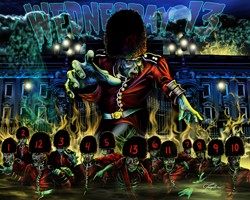 The DVD will feature live, backstage, up close and personal footage from the March 2013 UK tour and the 2012 London Halloween concert. Wednesday 13 commented, “This DVD will be the ultimate backstage pass for any W13 fan. We filmed every single second of the March UK tour. I want this DVD to show what we do, and how we do it… the good, the bad, and the ugly.”

With certain releases Wednesday likes to include his fans in with the artwork. This time, thirteen fans have a chance to be in the ‘Scream Britain Scream’ DVD artwork, as a member of the ‘Royal Ghouls’. Thirteen lucky fans can have their names attached to one of the ‘Royal Ghouls’ storming out of the gates of the Royal Palace by being the high bidder in one of Wednesday 13’s official eBay auctions.

This release will be different from previous releases as you will not only get to name your ‘Royal Ghoul’, but you will also get space in the liner notes to make a dedication, add a quote, or simply leave a note for your friends (up to 80 characters). You name the ghoul you win, with the name appearing on his hat in the artwork.