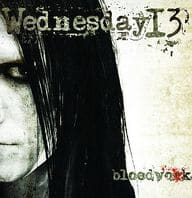 WOULD YOU LIKE TO GO TO A W13 SHOW.. FOR FREE? AND WHEN YOU’RE THERE, WOULD YOU AND A FRIEND LIKE TO MEET WEDNESDAY13 HIMSELF?… YES? THEN THIS COMPETITION IS FOR YOU!

GLOBAL MUSIC and ROCK SOUND MAGAZINE have teamed up to bring all you Wednesday13 fans the chance to meet the Prince of Punk-Horror himself, and win a load of W13 goodies to boot!

Global Music and Rock Sound are offering the opportunity for you and a friend to go backstage at any up-coming Wednesday13 concert and shake the hand of Mr.13 – Make sure you get your photo taken too!

As our specially selected winner, you’ll also receive a signed Skeletons CD, plus a copy of Wednesday13’s latest release, F**l It, We’ll Do It Live DVD and the new Bloodwork EP.

One winner will be selected for each show – that’s 15 in total!!, so make sure you state which concert you’d like to attend, should you win.

Reserve Your Copy of Bloodwork Now!

Punk-horror frontman, Wednesday 13 has announced his return to the UK with a series of live dates and the release of his Bloodwork EP. You can reserve your copy now at The Global Music Store.

The limited edition EP, due out March 16th 2009 via Global Music, features six tracks, including two previously unreleased songs – one a cover of Tom Petty and the Heartbreakers, Running Down A Dream, and the other, a re-recording of a song by Wednesday 13’s former band, Frankenstein Drag Queens From Planet13.

Also on the EP are acoustic renditions of two songs from Wednesday’s May 2008 release, Skeletons.