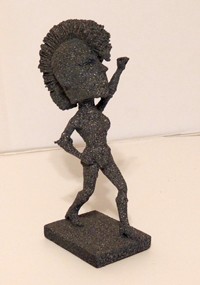 Wendy O. Williams, the unforgettable leader of The Plasmatics, is now available as a special edition statue Throbblehead.

This Throbblehead captures Wendy’s incredible 1982 look and is limited to 100 numbered units. It stands at 7 inches tall, and is made of a lightweight polyresin coated with a special rock treatment, making the figure look similar to a statue.

Displayed in a tri-windowed box, here she is accurately sculpted right down to the mohawk, spiked arm bands, and raised fist. The Throbblehead also comes with a very special Wendy O. Williams bottle stopper, perfect for the holidays. These handcrafted items come in either chrome or gold.

“Undermine the Status Quo!” with the very first statue Throbblehead at aggronautix.com.

Wendy O. (or “WOW”) as she was typically called, first grabbed the public’s attention as front person for the culture-shattering concept band Plasmatics, the counter-culture band of changing musicians created and put together around her by Yale MFA holding “anti-artist” Rod Swenson in 1977. Both Williams and Swenson shared a revulsion for the banality, conformity of contemporary cultural consumerism and its consequences and were determined to launch a head on assault.

Williams’ fearless attitude and uncompromising tough agressive vocals, claiming territory previously reserved for males, even while giving the stiff middle finger to the establishment saw her get a Grammy Nomination as Best Female Rock Vocalist of the Year, while her jaw-dropping stage shows and political stance saw her banned in London, arrested multiple times and severely beaten by the police in Milwaukee, WI.

During her 10 year recording career she produced 8 studio albums, multiple EPs, each which still stands as a landmark in musical history. Her death-defying accompanying videos still stand unmatched today, as do her stage shows which saw her destroying icons of mass consumerism such as the sledgehammering of TVs and the blowing up of full size cars on stage as well as the chainsawing of guitars.

On April 6, 1998 Williams committed suicide at the age of 48. The performer was found in a wooded area near her home and the state medical examiner said she died of a self-inflicted gunshot wound.