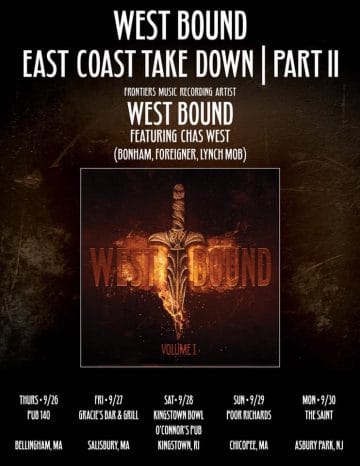 In an interview with Sleaze Roxx back in March 2019, West shared what were his favorite songs off West Bound‘s debut record:

“I like a lot of the songs on the record. I guess off the top of my head, I’d say “Dance of Life.” Roy Z, Dave and I found ourselves in a room together and that was the first song we wrote for the record. It has a great hook and a great positive spiritual message, you know, without being religious. And I love “Never Surrender.” It’s got a real anthemic feel, which really showed the other night when we played it live for the first time. People in the audience had their fists in the air, pumping and I was like, “Alright, yes!” “Ain’t Gonna Drown” has got that really cool Aerosmith bluesy feel to it. It’s a song [Brian] Tichy and I are wrote together. As for the ballads — you gotta have a little beauty with the bombast!

The second one — “Turn To You” — I wrote about my Mum who passed [away]. “Keeper of the Flame” is a great anthemic song also. And of course “Traveller” — I love that song. Both the lyrics and the melody are influenced by a lot of the bands that used the keyboard type sound in the ’70s — Rainbow, [Led] Zeppelin, Deep Purple. It’s all about taking a journey across the universe and while you are taking that journey, you somehow save mankind and humanity. So that one is dear to my heart and I dedicate that to all the stoner kinds, like myself in junior high school [laughs], who would lay back on the floor of their bedrooms with their headphones on listening to whatever their favorite music was and floating off into the sky and having big dreams about where their futures were going to go.”

Subscribe To Be Alerted When We Add New Videos – http://radi.al/SubscribeFrontiers | From the album “Volume 1”. Get your copy NOW: http://radi.al/WestBoundVo…