What will happen with Quiet Riot now that drummer Frankie Banali has passed away?

What will happen with Quiet Riot now that drummer Frankie Banali has passed away? That is indeed a legitimate question and one that is hard to answer and likely too early to answer at this time. 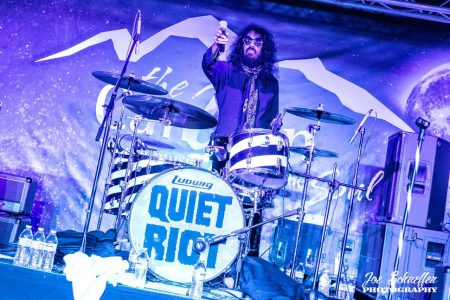 Back in July 2017, Banali was interviewed by Bobby Caughron of XS Rock and was asked whether he could foresee Quiet Riot continuing without him.

Banali replied: “No. I don’t think that’s going to happen. Once you put into perspective the fact that I am the only member of Quiet Riot that has been on every Quiet Riot record from Metal Health to Road Rage. The fact that I’ve managed the band since 1993, so not only am I a musician in the band but I’m also the business entity in the band. Kevin and I were always the two people who believed the most in Quiet Riot and now that Kevin’s gone, I continue to be the one that believes the most in Quiet Riot. I knew it wasn’t going to be easy. Listen, it hasn’t been easy since the band became successful with Metal Health. But, I am more than up for the task. I’m here for the duration.”

However, since that time, Quiet Riot have performed a number of shows without Banali in the line-up and with Johnny Kelly (Type O Negative, Danzig, Kill Devil Hill) as his replacement including at the Wildflower Arts & Music Festival in Richardson, Texas, USA on May 17, 2019; at Heavy Montreal in Montreal, Quebec, Canada on July 27, 2019; at the Buffalo Rose in Golden, Colorado, USA on August 24, 2019; and, at the Grand Rocktember Music Festival at the Grand Casino Amphitheater in Hinckley, Minnesota, USA on September 21, 2019. It was only on October 21, 2019 that Banali publicly revealed that he had been diagnosed with stage four pancreatic cancer back on April 17th of this year.

Another issue to be determined is who would be managing Quiet Riot now that Banali has passed away, and if the group continued, since the drummer indicated in an interview with Yahoo! Entertainment in November 2019 that he had been managing the band since 1993.

Only time will tell but Quiet Riot have at least proven that they can still play shows without any significant backlash even if none of their classic line-up members — Banali, singer Kevin DuBrow (who passed away in November 2007), bassist Rudy Sarzo and guitarist Carlos Cavazo (the latter two who have not played in the band since 2003) — are in the line-up.

Of note, Quiet Riot‘s Facebook page indicates that the band has concerts lined up at Reverb in Reading, Pennsylvania, USA on October 23, 2020 and at the Grand Falls Casino & Golf Resort in Larchwood, Iowa, USA on October 30, 2020.