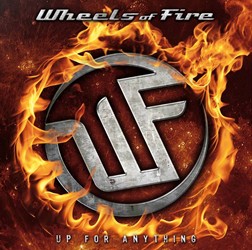 Wheels Of Fire Are ‘Up For Anything’ On New Album

Two and a half years after their debut album ‘Hollywood Rocks’, Wheels Of Fire return with their second record ‘Up For Anything’ — due for release on November 30th through Avenue Of Allies.

Following the first release by the band, which reached #42 on the charts of Japanese Burrn! magazine, Wheels Of Fire have established themselves in the club circuit in North Italy as an entertaining live act with a stable line-up, that also recorded the songs for their sophomore release. Frontman Davide ‘Dave Rox’ Barbieri and guitar player Stefano Zeni were already the core of the recording line-up of ‘Hollywood Rocks’, since then the duo was joined by Marcello Suzzani on bass, Andrea Vergori on keyboards/piano and Fabrizio Uccellini on drums.

The compositions of Dave and Stefano impressively show the progression of the band into a contemporary rock act incorporating modern elements into their sound while staying true to their musical roots of ’80s melodic rock. Wheels Of Fire stand for instantly memorable vocal lines and choruses with carefully arranged harmonies, hook-laden powerful guitar riffs and solos combined with well balanced keyboards and piano entries, big sounding drums and solid bass tracks.

Dave delivers a highly professional production job on ‘Up For Anything’, and for the album mix and mastering Roberto Priori (Danger Zone) was behind the studio desk.

On the list of international guests appearing on ‘Up For Anything’ are House Of Lords’ James Christian, who performs a vocal duet with Dave on the midtempo rocker “Don’t Walk Away”. Christian’s wife, Robin Beck, joins him on backing vocals. Swedish guitar player Rob Marcello (Danger Danger, Marcello-Vestry) laid down the solo for “No Mercy” while contributions from local Italian musicians come from Michele Luppi (Secret Sphere, Los Angeles, ex-Vision Divine), Roberto Zari and Andrea ‘Mitzi’ Dal Santo on backing vocals throughout the album and a full horn section on “Yesterday’s Gone”.

Following the release of the album the band will hit the road again in 2013 to present their new songs.