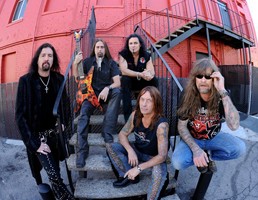 Where Angels Suffer, featuring former W.A.S.P. members Chris Holmes and Stet Howland, will be performing dates across the UK and Europe in August and September.

The band, consisting of singer Rich Lewis (ex-Animal), guitarists Chris Holmes and Ira Black, bassist Steve Unger (ex-Metal Church), and drummer Stet Howland, look forward to bringing their brand of American Heavy Metal to the fans and will play a selection of originals and also some songs from their collective past. Fans will also get a chance to meet some of the most notorious characters in the history of Heavy Metal, as the band will be doing a meet and greet after each show, so bring your cameras, memorabilia, albums, posters, magazines, and flesh to be signed!

Where Angels Suffer is a project that is long over due. This all-star band of Metal Royalty has come together to create a new album called ‘Purgatory’, encompassing the essence of great Metal Rock bands. The project came naturally, as the artists share a unique style and talent that will be showcased on this exciting album. The band will embrace their metal history while simultaneously astounding their fans with ground breaking original songs that could have only by created by the exceptional chemistry and passion these professional musicians discovered when they came together in their new creative endeavor Where Angles Suffer.

To find out more about Where Angels Suffer visit whereangelssuffer.com and www.facebook.com/pages/Where-Angels-Suffer-Official-Site/208331399192170.

Support on all the UK dates will be Lincoln’s Knock Out Kaine — www.knockoutkaine.comom — who recently played the Download Festival at Donington.